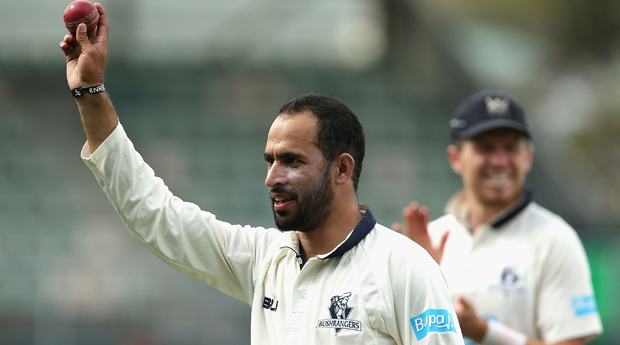 David Hussey and Greg Shipperd were also honoured for their contribution to Victorian cricket during the evening, with Hussey announcing that he had played his last game for the Commonwealth Bank Bushrangers.

Ahmed claimed his first ever Bill Lawry Medal for the Bushrangers’ Bupa Sheffield Shield player of the season while White notched his second Dean Jones Medal and Lanning won both the Sharon Tredrea Award and the Cathryn Fitzpatrick Award.

Ahmed was just the third Victorian spinner in history to claim 40 wickets in a Sheffield Shield season and his performance in the Sheffield Shield Final, in which he claimed a record 8-89 in the first innings, ensured his victory.

It was the second year in a row that White has claimed the Dean Jones Medal, having also being named Player of the Series of the Matador One-Day Cup.

He amassed 354 runs, at an average of 59, and also struck two centuries.

It was the third time that the Commonwealth Bank VicSpirit captain has been awarded the Cathryn Fitzpatrick Award after previously going back-to-back in 2011 and 2012.

Lanning was the VicSpirit’s highest run-scorer in the tournament, accumulating 445 runs, at an average of 49.

In the one-day series, she was the leading run-scorer in the competition with 440 runs coming at an average of 62.85.

In other awards, James Pattinson was announced as the Melbourne Renegades’ Player of the Season after several fiery spells in BBL|04.

John Hastings was awarded the Melbourne Stars’ Player of the Season after a season in which he was the leading wicket- taker in the competition, with 16 scalps.

Tayla Vlaeminck and Sam Grimwade were also named the Commonwealth Bank Future Star Award winners for the best under-age players in the state.

Earlier in the night, the winners of the Cricket Victoria Media Awards were also announced with legendary writer Ken Piesse winning the major award.