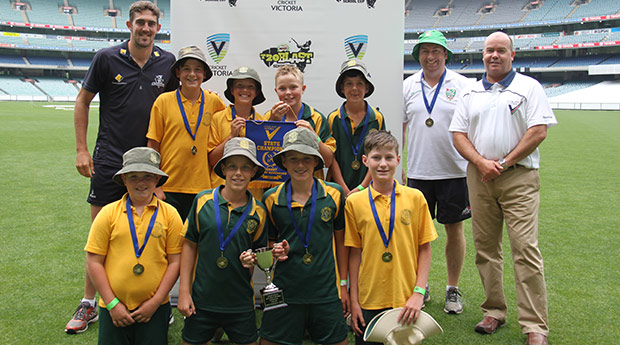 The team that defeated Karoo, 207-151, dedicated its state final win to their principal, who is currently battling a medical issue.

“It’s really one for the little guys who were taking on the big boys in Melbourne.

“It’s extra special for us because our principal is facing a major health battle so we were rocked last week with some pretty bad news.

“It just means so much to the St John’s community and everyone involved and whether we won or not, it didn’t really matter because our thoughts are with our principal.”

Meanwhile in the girl’s division, Warrnambool East posted a score of 182 to claim the title over Kew East who fell short with 133.

Over the course of the season, more than 3000 primary school teams participated in the modified competition, across the Year 5/6 level.

Teams that advanced to the state final competed at both their local carnival and regional finals to progress through to the MCG.

“It was great to see schools come from across the state to compete in the tournament,” Cricket Victoria Schools Coordinator Ryan Batchelder said.

“There was some really good cricket played throughout the competition and on behalf of everyone at Cricket Victoria, I would like to congratulate all that participated in this year’s MILO T20 Blast School Cup.”