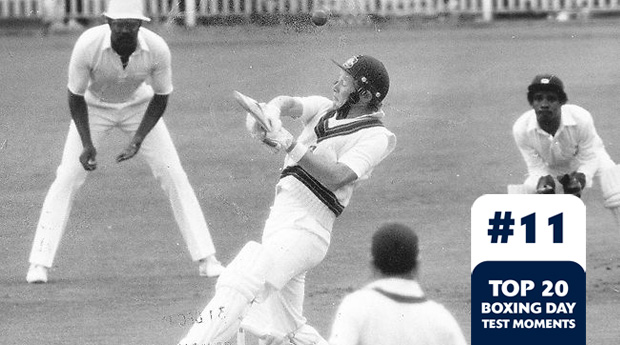 Ian Chappell called it the bravest innings he has ever seen.

Ian Chappell called it the bravest innings he has ever seen.

Against the West Indian pace quartet of Joel Garner, Colin Croft, Andy Roberts and Michael Roberts, Kim Hughes stood tall in the 1981 Boxing Day Test, hitting an unbeaten 100 as his teammates fell around him.

On a MCG wicket that was playing inconsistently, Hughes walked to the crease at 3-8.

Ian Chappell recalled to Cricinfo his memory of the innings.

“He took the West Indian quicks on, he pulled them and hooked them,” Chappell said.

“It was an innings of great bravery.

“It takes a lot of mental fortitude to take the bowlers on (on a pitch like the one that Hughes faced).”

After Australia was dismissed, Dennis Lillee ripped through the West Indian top-order, including Viv Richards with the final ball of the first day in one of the best spells seen at the ground.

The West Indies fought back on day two to snatch a three-run first innings lead.

The home side posted 222 in their second innings, despite the best efforts of Holding (6-52) with Hughes (eight) unable to repeat his heroics.

The Australians, led by off-spinner Bruce Yardley (4-38), bowled the West Indies out for 161 to secure a famous victory.