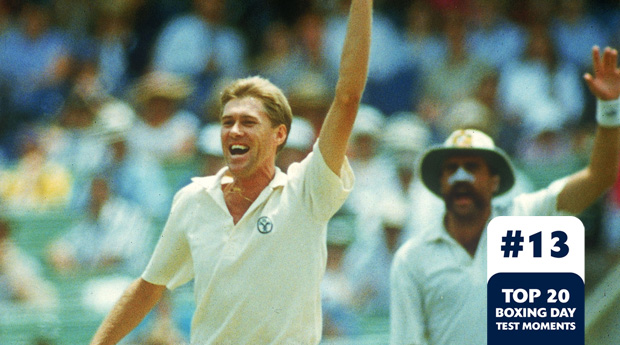 Bruce Reid turned the 1990 Ashes series on its head in what the English team manager would later describe as 50 minutes of madness.

Reid claimed 7-51 in the second innings, to finish with match figures of 13-148, the best in a Boxing Day Test.

A century from David Gower helped England amass 352 in the first innings with Reid delivering 39 overs to pick up 6-97.

Australia’s top order all got starts but no one could post a big score as Allan Border (62) and Mark Taylor (61) top-scored.

English paceman Angus Fraser ripped through the tail with 6-82 as England went into their second innings with a 46-run lead.

That lead would stretch to 193 when the tourists were 4-147 at the tea break on the fourth day before the “50 minutes of madness”.

Reid and Greg Matthews claimed 6-3 from 12 overs after the resumption of play as England self-destructed to be all out for 150, setting Australia 197 for the victory.

Two early wickets gave England hope before Geoff Marsh and David Boon shared in a 187-run unbroken stand to lead Australia to a win in the final session off the match.

Reid would repeat his 1990 heroics the following summer when he grabbed 12-126 against India.

In four Tests at the home of cricket, Reid took a remarkable 35 wickets at an average of 13.57.