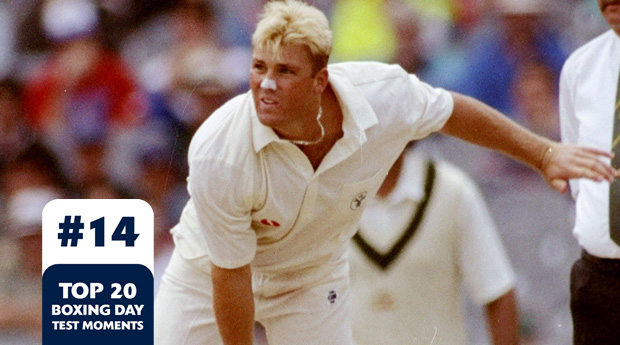 On the morning of the final day of the 1992 Boxing Day Test, Shane Warne's career was in the balance. Two sessions later, Victoria would have a new favourite son.

On the morning of the final day of the 1992 Boxing Day Test, Shane Warne’s career was in the balance.

Two sessions later, Victoria would have a new favourite son.

With his position in the side in jeopardy, having just been recalled to the side after being dropped and having taken 5-451 in Tests to that point, Warne bamboozled the West Indians with 7-52, kick-starting a legendary career.

Twin centuries from Allan Border (110) and Mark Waugh (112) against an attack led by Curtly Ambrose and Courtney Walsh guided the home side to a first-innings total of 395.

Warne gave no sign of what was to come in the West Indian’s first dig, picking up the sole wicket of Ambrose as Craig McDermott (4-66) and Merv Hughes (3-51) restricted the tourists to 233.

The Windies were set 359 to win after Australia could only post 196 in their second innings.

At 1-143 on the final day, with Phil Simmons and captain Richie Richardson in control, it appeared that the West Indies would record a comfortable victory before Warne turned the match just before lunch with a flipper that Richardson did not read and it cannoned into his stumps.

Warne then weaved a spell over the West Indians, as they lost 9-76, with the 23-year-old leg spinner finishing off the match with 4-3 from the Great Southern Stand end.