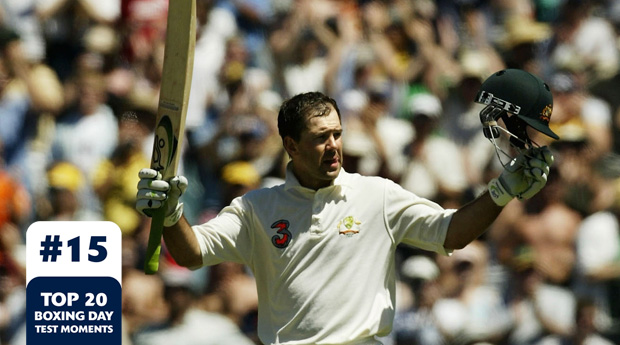 Few players have performed with such distinction at the sporting coliseum of the Melbourne Cricket Ground like Ricky Ponting.

Few players have performed with such distinction at the sporting coliseum of the Melbourne Cricket Ground like Ricky Ponting.

He has scored more runs in international matches at the MCG (3467 at 56.83) than any other player.

His finest innings at the ground came in the 2003 Boxing Day Test against India when he struck 257.

Having watched Virender Sehwag blast 195 on the opening day, Ponting batted for 10 hours to steer his side to a sizable first-innings lead, and ultimately, the match.

At 1-278 after tea on day one, and with Sehwag savaging the inexperienced Australian attack, it looked like India was set to compile a huge total.

But the loss of Sehwag to part-timer Simon Katich triggered a collapse which saw India lose 9-88 to be all out for 366.

Ponting eliminated all risk on a pitch that became more difficult to play on as he batted India out of the match, dismissed after a 458-ball stay at the crease by Kumble.

It was Ponting’s third double century of the year and he became just the fifth player, after Walter Hammond (twice), Don Bradman (three times), Vinod Kambli and Graeme Smith to score double centuries in successive Tests.

Career-best figures from Brad Williams (4-53) helped knock over the tourists for 286 in their second dig, setting Australia 95 for victory.

Hayden hit an unbeaten 53, to go with his first-innings century (136), while Ponting (31) deservedly hit the winning runs.