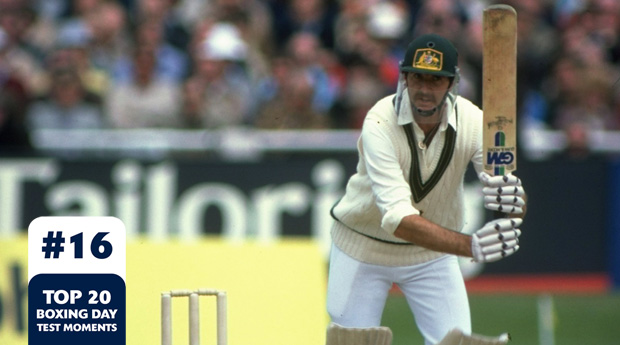 Graham Yallop's twelve-hour double-hundred in the 1983 Test against Pakistan still stands as the highest score in a Boxing Day Test.

Graham Yallop’s twelve-hour double-hundred in the 1983 Test against Pakistan still stands as the highest score in a Boxing Day Test.

A Mohsin Khan (152) century and 83 from skipper Imran Khan led Pakistan to a healthy first-innings total of 470.

Yallop walked to the crease late on day two with Australia 1-21 and saw off the attack led by Sarfraz Nawaz and Abdul Qadir to finish the day unbeaten on 24.

Yallop batted the duration of the third day, taking his score from 24 to 173, and combined with Kim Hughes for a partnership of 203.

He was finally dismissed in the final session on the fourth day we Australia 9-553.

Australia looked a chance to record a victory on the final day when they had the tourists 5-81 but Imran Khan and Zaheer Abbas rallied to guide Pakistan to a draw.

The innings would be Yallop’s fourth-last in Test cricket with the Victorian succumbing to injury shortly after.