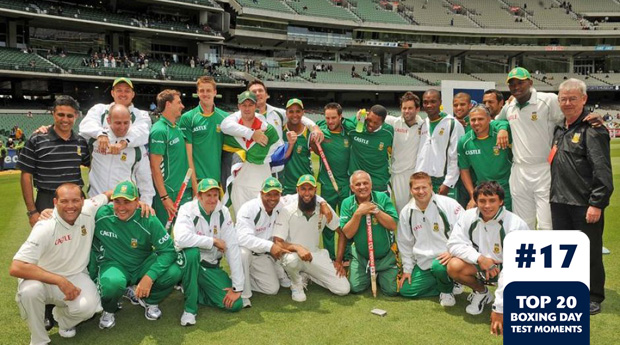 South Africa claimed what captain Graeme Smith described later as the country's "finest win" when they defeated Australia by nine wickets in the 2008 Boxing Day Test.

A masterful all-round performance from Dale Steyn, two five-wicket hauls and a 76, confined Australia to their first series loss at home in 16 years.

A typically cavalier century from Ricky Ponting (101) and an unbeaten 88 from Michael Clarke helped Australia compile a first-innings total of 394.

Three crucial wickets from Victorian Peter Siddle put the home side in the box seat and at 7-184, the tourists were staring down the prospect of following-on.

Unknown second gamer Jean-Paul Duminy then produced one of the finest innings seen at the MCG, peeling off 166, with support from Paul Harris (39) and Steyn (76).

South Africa took all the momentum, as well as a 65-run run lead, into the second innings and with Steyn grabbing 5-67, Australia set the tourists a target of 183.

It was only another MCG masterclass from Ponting (99) that got the home side to a total of 247.

An attacking Smith (75) ensured there would be no fourth-innings collapse as the South Africans cruised home with nine wickets in hand after lunch on day five.