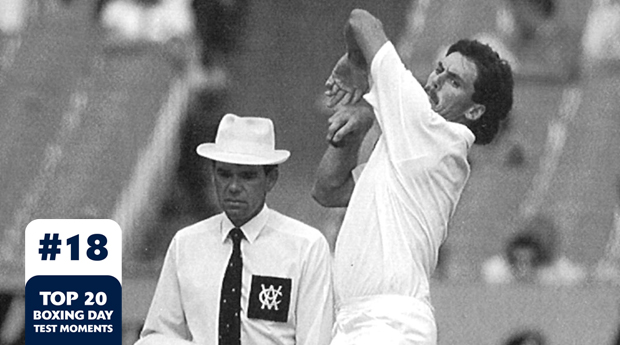 For a Victorian cricketer, it doesn't get any better than making your debut in a Boxing Day Test and performing well.

For a Victorian cricketer, it doesn’t get any better than making your debut in a Boxing Day Test and performing well.

Brought in as a replacement for an injured Merv Hughes, the match started perfectly for Dodemaide in front of 51,807 Victorians, claiming the wicket of New Zealand opener Phil Horne in the opening session.

The Kiwis posted 317 in their first innings, thanks mainly to John Wright (99) and Martin Crowe (82), while Craig McDermott claimed 5-97.

The third day saw an Australian fight back led by Peter Sleep (90) and Dodemaide (50) as they gave their side a 40-run lead.

Dodemaide became just the second Australian, after Victorian Albert Trott in 1901, to take a five-wicket haul and make a half-century on debut when he collected 6-58 in New Zealand’s second innings.

Dodemaide remains one of only two players, with West Indian Fidel Edwards, to have taken a bag of five wickets on both one-day international and Test debut.

Australia were set 247 to win on the final day and at 4-176 they looked set for victory requiring just 71 from 28 overs but another lion-hearted performance from Hadlee (5-67) swung the match in New Zealand’s favour.

The third-highest day five attendance at a Boxing Day Test, 23,859, were on the edge of their seats as Mike Whitney and Craig McDermott had to keep out the last 29 deliveries of the match to hang on for a draw.