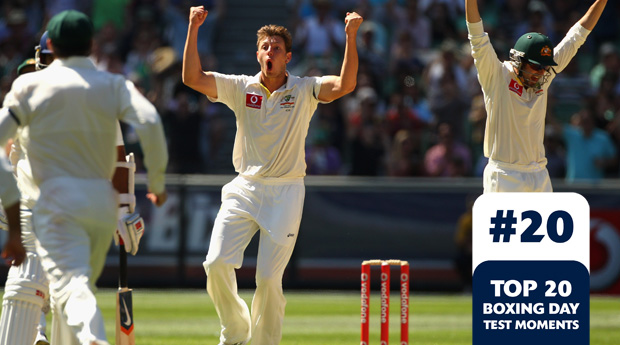 There is nothing like a big Boxing Day Test crowd to get a Victorian fired up and in 2011, the visiting Indians felt the full brunt of Bushrangers pace duo James Pattinson and Peter Siddle.

There is nothing like a big Boxing Day Test crowd to get a Victorian fired up and in 2011, the visiting Indians felt the full brunt of Bushrangers pace duo James Pattinson and Peter Siddle.

In just his third Test, Pattinson took man-of-the-match honours with 6-108 and a career-best score of 37, while Siddle grabbed 6-105.

More than 70,000 arrived on Boxing Day to see the opening day of the Test series against an Indian side featuring ageing superstars Sachin Tendulkar, Rahul Dravid, Virender Sehwag and VVS Laxman.

Siddle (41) and Pattinson (19) both scored valuable runs early on the second day as another crowd over 50,000 turned up.

With India seemingly cruising at 2-214, Siddle collected the prized wicket of Tendulkar late in the day to change the momentum.

Australia battled in the second innings, falling to 9-197 before Pattinson (37*) combined with Ben Hilfenhaus for a valuable last wicket partnership of 43 to set the tourists a target of 290 for the victory.

Pattinson and Siddle ripped through the highly fancied Indian top order, removing Gautam Gambhir, Dravid, Tendulkar, Laxman and the captain MS Dhoni to seal an Australia win on the fourth day by 122 runs.

Pattinson said after the match that performing in a Boxing Day Test was a childhood dream.

“To be out there on Boxing Day and against India, with the batting line-up … I know Sachin … I wasn’t even born when he started playing cricket,” Pattinson said.

“To go out there and bowl against him and have some success against their batsmen is just unbelievable.

“To get a win is even better.

“For me it’s a dream come true to play cricket for Australia.”

Watch the highlights of the fourth day at http://cricvi.co/Qyunw6