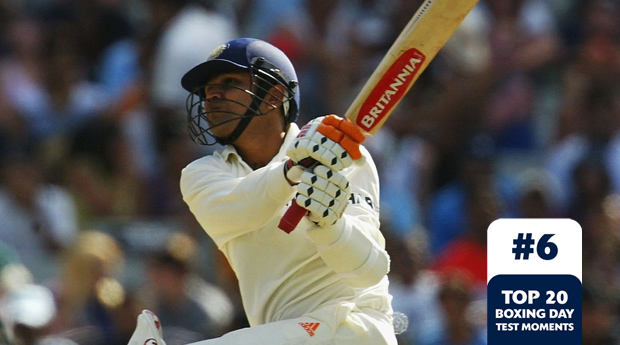 Virender Sehwag delivered one of the most breathtaking innings seen in Australia when he pummeled 195 on the opening day of the 2003 Boxing Day Test.

Virender Sehwag delivered one of the most breathtaking innings seen in Australia when he pummeled 195 on the opening day of the 2003 Boxing Day Test.

The right-hander was struck early on the helmet ducking into a Brett Lee bouncer but he turned the table on the home side and was particularly severe on leg-spinner Stuart MacGill, who he clubbed for 48 runs from just 35 deliveries bowled at him.

He eventually succumbed to a full-toss from part-timer Simon Katich, which he smashed to Nathan Bracken at deep mid-wicket.

“Having at that stage known little of this opener, it was astonishing to see his high level of pluck.

“His stand-and-deliver approach, which was also reflected in his lack of footwork, came within five runs of delivering him a double-ton on the opening day.

Sehwag’s dismissal triggered a collapse by the Indians as they lost 9-88 to be all out for 366.

Matthew Hayden (136) and Ricky Ponting (257) then batted India out of the match with Australia compiling 558.

Ponting eliminated all risk on a pitch that became more difficult to bat on, eventually dismissed after a 458-ball stay at the crease by Kumble.

It was Ponting’s third double century of the year and he became just the fifth player, after Walter Hammond (twice), Don Bradman (three times), Vinod Kambli and Graeme Smith to score double centuries in successive Tests.

Career-best figures from Brad Williams (4-53) helped knock over the tourists for 286, with Sehwag scoring just 11 in their second dig, setting Australia 95 for victory.

Hayden hit an unbeaten 53 to go with his first-innings century (136), while Ponting (31) deservedly hit the winning runs.