Brennan and Blows star for U15s 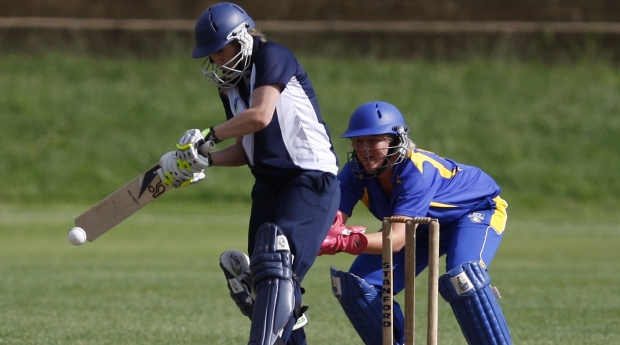 Victoria has continued its great start to the Under-15 National Championships with a commanding 53-run victory in the day two clash against the ACT.

The win was set up by two superb individual efforts, an unbeaten innings of 96 from Makinley Blows and a six-wicket haul from Hayleigh Brennan.

Batting first, Victoria began cautiously, with openers Blows and Claire Nolte blunting the ACT attack to be 0-34 from 15 overs.

When day one hero Sophie Molineux fell at 2-84, Victoria looked to be in a perilous position with just 14 overs to go.

However, strong partnerships between Blows and the middle order ensured Victoria would be setting a competitive total.

Blasting the ACT bowlers late, Blows finished just shy of a hundred, remaining unbeaten on 96 at the conclusion of the innings, in which Victoria managed 169.

“We knew that she had it in her. She was in the program last year, but has improved out of sight,” Harrison said.

“It was a pretty special performance”.

On the back of a strong performance on day one, the Victorian bowling attack again flexed their muscles, with another devastating effort on day two.

Hayleigh Brennan wasted no time stamping her authority on the contest, with her 3-8 off her first two overs, reducing the ACT to 4-16 off 4.

Limping to 6-80, the ACT threatened to claw their way back into the contest, needing a run a ball for victory, however, Hayley Brennan’s stellar day continued, wiping out the tail to finish with 6-29, and handing Victoria a 53-run victory.

Harrison was pleased with the result, however, expressed that the focus had shifted to today’s two T20 fixtures.

“We are really happy with the result. We had some effective partnerships with bat and ball that helped us set up the game,” he said.

“We know that for us however, the challenges just keep getting bigger. We have some of the bigger states coming up, that will be difficult to beat.”

Brennan’s performance was of particular note to Harrison, who was eager to see her ‘untapped talent’ progress throughout the tournament.

“Hayleigh is a bottom age player who has really developed this season, she has started off these championships fantastically,” Brennan said.

The Under 15 National Championships continue today, with two T20 fixtures against Queensland and South Australia.