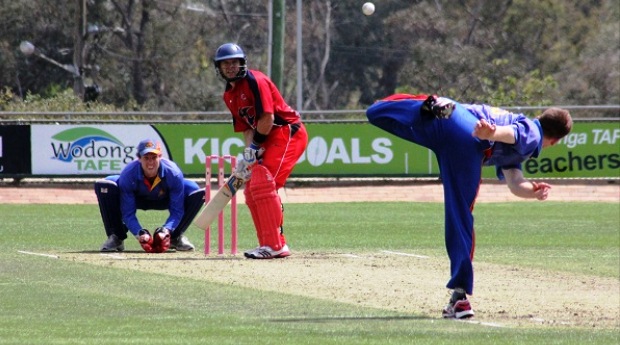 Brad Hodge put on a clinic in Albury on the weekend by smashing 93 from 59 deliveries at the Lavington Sports Ground as his preparation for the second edition of the Big Bash League (BBL) hit overdrive.

The Melbourne Stars batsman said in the lead up to the weekend’s inaugural Premier Cricket Bush Bash that he was looking for quality time in the middle, and he certainly got that, blasting 10 fours and three sixes as his club side Melbourne comfortably defeated Frankston.

Hodge could only manage nine in game two against Ringwood as the Demons went down to the Rams.

Demons teammate and Melbourne Renegades batsman Michael Hill made a rapid-fire 29 from 18 deliveries against the Heat including five boundaries.

Like Hodge, Hill wasn’t amongst the runs second time around, making just two.

Bryce McGain did his chances of a BBL contract no harm with a pair of three wicket hauls for Prahran as the True Blues comfortably won their matches against Northcote and North Melbourne in Barooga.

The former Test leggie claimed 3-13 against the Dragons before grabbing 3-31 against the Roos in game two from his full allocation of overs.

Reining Ryder Medalist and Stars spinner Clive Rose performed consistently with bat and ball for Casey-South Melbourne in Morwell over the weekend, taking 1-28 from four overs and making 16 against Dandenong in game one.

Against Fitzroy Doncaster in game two he made a composed 18 not out before delivering two economical overs for the return of 1-6.

Also in Morwell was Renegades quick Darren Pattinson, who turned out for Dandenong.

Pattinson claimed the key wicket of former Victorian opener Lloyd Mash against the Lions finishing with figures of 1-27 from four overs.

Against the Swans he was at his economical best, claiming 1-17 from four.

Arriving for their first games in Victoria in the lead up to the BBL were Melbourne Renegades all-rounder Aaron O’Brien and batsman Daniel Harris.

The pair both played for the Adelaide Strikers last season, with O’Brien poised to play for Richmond for the duration of the BBL, while Harris goes to the Lions.

O’Brien made 34 not out and 23 not out against the Hawks and Magpies in Wangaratta, while Harris clubbed 68 to get the Lions home against the Panthers in Morwell.

Renegades quick Brendan Drew grabbed 2-26 against the Hawks for Camberwell, while Renegades leggie Fawad Ahmed went wicketless against the Saints (0-22 from 4) and Blues (0-12 off 4) but was extremely frugal.

Follow Renegades spinner James Muirhead was impressive for St Kilda, capturing 2-25 against Carlton before finishing with 0-32 against Melbourne University.

Renegades all-rounder Will Sheridan played for Richmond as a specialist batsman as his comeback from a knee injury sustained in the RYOBI One-Day Cup continues.

Opening the batting, Sheridan made 15 as the Tigers easily accounted for the Magpies.

Meyrick Buchanan bowled tightly in both games in Horsham on Saturday, taking 1-16 off three against the Bombers and 1-24 from four against the Doggies.

The young Renegades all-rounder didn’t feature with the bat, making a duck and four in his two innings.