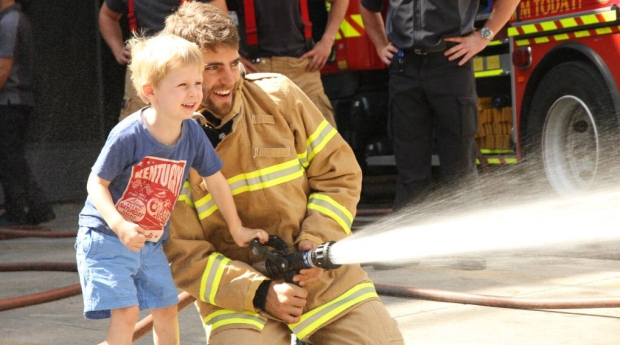 Cricket Victoria entered into a partnership with the State Government earlier this season with the aim of promoting the FireReady message.

Carters was on hand as the MFB showed school children how they could prepare their homes, with the Bushrangers wicketkeeper reading safety messages over the PA system and assisting kids through an obstacle course.

“They were hanging off every word the firemen were saying,” Carters said.

“It was a very hands on exercise and I’m sure the kids enjoyed every minute of it.”

The FireReady message has featured prominently through perimeter advertising at the MCG this summer for all international fixtures including the iconic Boxing Day Test.

The CFA also had a large presence at Victorian Premier Cricket’s Bush Bash round in November with fire trucks and officers seen at Horsham, Bendigo, Wangaratta and Morwell.

CV Chief Executive Officer Tony Dodemaide said at November’s announcement, which came in the middle of Fire Action Week, that the partnership was a reminder for Victorians to begin their preparations for the fire season.

“With a large proportion of our 1,176 clubs based in high-risk fire areas, the partnership between the Summer Fire campaign and Cricket Victoria is an obvious fit,” Mr Dodemaide said.

“The synergy between cricket clubs and the CFA is clear with both representing the heartbeat of regional communities.