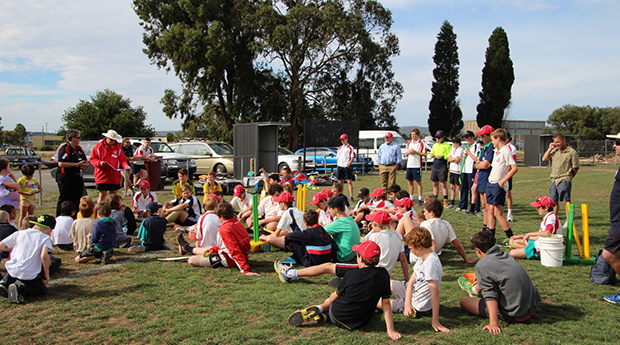 Wendouree Cricket Club (WCC) is reaching out beyond the boundary in an initiative which aims to help Indigenous children from around Australia play cricket.

The program, ‘Cricket without Boundaries’, in its first year of operation is already making great strides in the local and wider community.

In 2014-15, the club partnered with Ballarat and District Aboriginal Co-operative and ran two clinics in November and January for local Indigenous children, with WCC juniors taking an active role in the sessions.

Junior working club member, Natarsha Williams says the program was well supported by the club, especially by its juniors.

“We got our junior kids from the club to run the sessions and we virtually had one-on-one coaching, with approximately 70 children taking part in each session,” Williams said.

“The sessions were held at Wendouree Reserve and were equally beneficial, as all the kids learned something from each other whether it was a skill or about culture.

“During the sessions we promoted healthy eating and provided fresh fruit to all participants while each child received a water bottle.”

Williams says the program started with an idea to send used gear to Indigenous cricketers around the country.

“All our kids from the club have gear and every year they get new gear as they get bigger,” Williams said.

“So we decided to collect some kits and send them off to Yuendumu, a remote community 300km north-west of Alice Springs.”

Supported by the State Government through Cricket Victoria’s Harmony in Cricket projects, Williams says the club is hoping to expand the program in coming seasons.

Williams says the club is proud of what its achieved since the program’s inception and expressed her joy of its success.

“We’re delighted at what we’ve achieved in our first 12 months, it’s amazing what a small community is capable of,” Williams said.

“Seeing see the smiles on the kids faces, it’s the most rewarding thing I’ve ever done.”