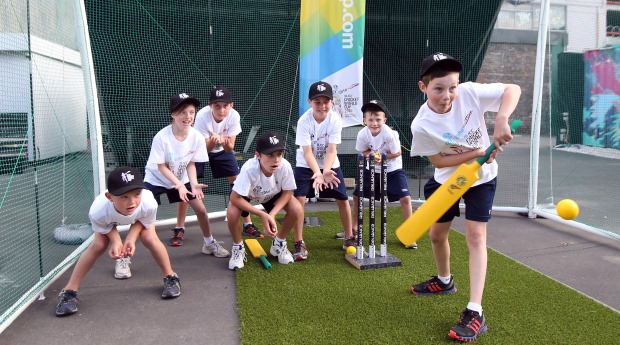 The countdown to one of the globe's biggest sporting events has begun in earnest with today marking exactly one year until the opening match of the ICC Cricket World Cup 2015 in Australia at the MCG.

Earlier today, tickets to the once-in-a-generation sporting event went on sale to the general public, with the MCG poised to host five fixtures including the Final.

To mark the occasion, a countdown clock was unveiled at Federation Square today by some of the game’s biggest names including Cricket Australia CEO James Sutherland and his Cricket Victoria counterpart, Tony Dodemaide, as well as Australian representative James Faulkner, former World Cup hero Damien Fleming and the Victorian Minister for Sport and Recreation, the Hon. Hugh Delahunty, MP.

“The countdown to one of the world’s biggest sporting events is well and truly on,” Mr Dodemaide said.

“The 2013-14 summer has been one of the most successful in memory and with a world-record crowd attended the MCG on Boxing Day, we certainly hope we can continue to set attendance records during the ICC Cricket World Cup 2015.

“With tickets now on sale to the general public, I would implore Victorian cricket fans to act fast so they are not disappointed in missing out on attending this once-in-a-generation sporting event.”

As one of the biggest sporting events in the world, organisers are expecting more than one million people to attend matches in Australia and New Zealand and more than one billion to watch the global broadcast.

The 10 full member nations of the ICC will compete for the ICC Cricket World Cup 2015; Australia, New Zealand, India, England, South Africa, Sri Lanka, Pakistan, Zimbabwe, Bangladesh and the West Indies as well as four nations that have qualified for the tournament; Ireland, Afghanistan, Scotland and the United Arab Emirates.

All of the visiting teams will play in both Australia and New Zealand to ensure fans have the best chance to see their favourite team.

The final pools for the tournament are:

Children’s tickets are available for every match in the tournament, including the Final.

All children’s tickets for the pools stage are $5 and prices for adults start from just $20.

Tickets can be purchased at www.cricketworldcup.com and from Ticketek outlets across Australia.