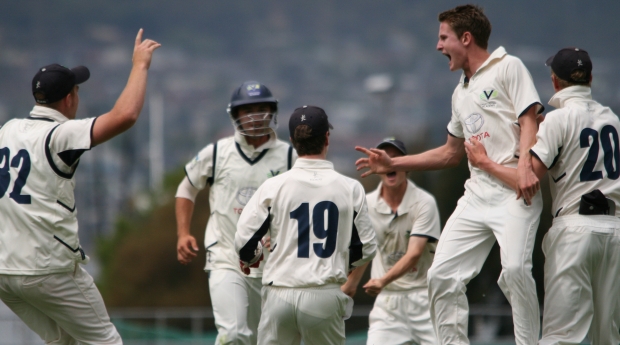 In the under-19s the game got started at 1.15, with Anthony Brolic and Ash Armstrong opening up against Adam McMaster again.

Last night left 35ml of rain, which, as the locals said, was definitely needed.

However, this week was not the week to have with three games of cricket to be played.

Tireless work from the fantastic ground staff meant all games were able to get their required overs in.

So kudos to you.

In the under-19s the game got started at 1.15, with Anthony Brolic and Ash Armstrong opening up against Adam McMaster again.

Country got the start they wanted when Callum Nankervis dismissed Armstrong without adding to his overnight score, bringing Ringwood Ram and Northern Falcon Jonty Rushton to the wicket.

He and Brolic batted steadily, against some equally tight country bowling and Metro were 3-160 after 58 overs.

When Broccoli got to 49 his half-century seemed just a couple of seconds away.

But through some ‘accidental’ farming of the strike from Rushton, Brolic was still stuck on 49 for four overs before finally lofting Waterfall over long on to reach his 50.

As Country’s attack began to falter, Rushton began to take it to them and he skipped away to 38 off 53 balls as Metro brought up their 200.

Skipper Luke Ford, however, struck with another caught and bowled and Brolic was gone for a well compiled 58.

Rushton continued to strike balls cleanly and put Ford well over square leg to reach his fifty off just 67 balls.

He continued to pile on the pressure, and was 63* with six overs left of their innings, with Metro 4-232.

Rushton’s hard swinging continued and the total reached 4-271 at the end of their innings, with Rushton finishing 90* off just 101 balls.

Country genuinely cannot catch a break with their starts.

BFG Kieran Elliot struck twice in his second over and Country were 2-12 after four overs, sending Waterfall and La Brooy packing.

It went from bad to worse when BQV2 (Shea Gribben) snicked off Isaac Willett and Country were 3-13.

There was a big let off when Billington was dropped by Ejaaz Alavi at second slip off the bowling of the Great White Shark (Josh White).

A rear-guard action from Billington and Balshaw had Country finally looking the goods and they had climbed to 3-68 after 17 overs.

Then Essendon CC’s Nishal Perera produced an absolute pearler to bowl Billington through the gate from around the wicket, and as Billington trudged off after a well-made 40, Country were 4-68.

Skipper Luke Ford and Curtly Balshaw however didn’t roll over, and continued to fight as the spinners began to operate from both ends, and after 30 overs they were 4-91.

As the Barooga sun settled, the spinners skipped in from the shadows creeping across the surface.

Brolic however was not enjoying this picturesque setting copping a Luke Ford cut shot straight in the knee, whilst fielding at silly point, and seemed to be in a world of pain.

Country brought their hundred up in 36th over with Balshaw closing in on his 50.

And as he finally did place the ball behind point into the dusk, Country had a slight feeling of confidence going into tomorrow.

Through working singles, and the odd belted boundaries , the Metro total began to look more and more substantial.

After a tough fighting 96-run partnership, Parsons was undone, bowled by Brodie Symons, for 36 off 111 balls, which put Metro in a position to compete.

Mark Butler however continued his courageous innings, but was finally dismissed after 135 balls for a well played 56.

Metro’s run total then rested on young Jack Gilbert who kept the strike away from Lachlan ‘ Sandilands’ Downes and began to open the shoulders and was able to get the total up to 175, before Sandilands was caught plumb in front and the tail had finally stopped wagging.

Country started slowly in their chase as Luke Inglis and Nick King knuckled down.

But Butler, still running off adrenalin from his monster innings, struck straight after lunch to have Inglis LBW for 7.

When Blake Thomson got going, he really got going.

His speed between the wickets, accompanied by some tantalising stroke play, left him to lift Country’s total.

The Metro bowlers also were a bit both sides of the wicket, helping Mr Thomson’s cause.

After big Sandilands got the Danger man for a fantastic 49, King continued to build slowly and was 22* in the 25th over with Country seemingly cruising at 2-90.

Blake Parsons was operating economically but needed a partner at the other end, as King looked immoveable on this now flat wicket.

King was however finally removed on 32, caught off the bowling of Ben Roughsedge. Ryan Hartley was joined at the wicket by Jakob Tidyman- described as “the typical country Bogan”, and the continued they job their top order had already started.

Parsons continued to operate in a ‘Rangana Herath’ sort of style, 0-20(11) at that stage.

Finally Metro got something going; when Jack Gilbert struck twice in consecutive balls and Country were 5-116.

When short-leg was called in, the pressure began to be piled onto the Country lower-order, and the still settled Iceman Ryan Hartley.

Symons and Hartley brushed aside the idea of a Metro win and powered towards the total, before Symons was bowled by Parsons attempting a sweep shot.

Hartley remained measured and held the ship together in case of emergency.

And he was needed , when Kochy nicked off yesterday’s hero Kyle Bienfeldt, and Country were 7-164 needing 10 to win.

Then little Jonty Chaproniere was run out with a huge Mark Butler throw from the boundary, and Country were 8-170.

The two teams will play a T20 tomorrow to fill in the time whilst the Under 19’s find a winner, and give one last chance for Metro to get a win under their belt.

Over at Bank Street, the ground had been hit a little bit harder.

When the cricket did start the Vics started like a house on fire.

Chasing ACT’s 167, and with just 45 overs to play today, Brayden Stepien took no time to get his “Step in” time ( I’m so sorry I just had too.) and kicked one with him caught for 45.

The Vics began to roll on with the falafel Ben Therlfell playing some graceful cricket shots, with some amazing timing and relaxed nature.

At the other end, Nick Taranto knuckled down and played second fiddle as the Vics churned on and it looked grim for ACT.

When skipper Jackson Koop strolled out to the middle, he left no stone unturned smashing his way to 33 not out as the Invitational XI cruised to a seven-wicket victory in just 45 overs with partner Teeran Gleeson 17 not out.

The Vics take the biscuits 2-1 heading into a T20 tomorrow before we pack up and head for home.

And as much as home is good, the daily grind just isn’t the same as whacking a few balls with some willow.