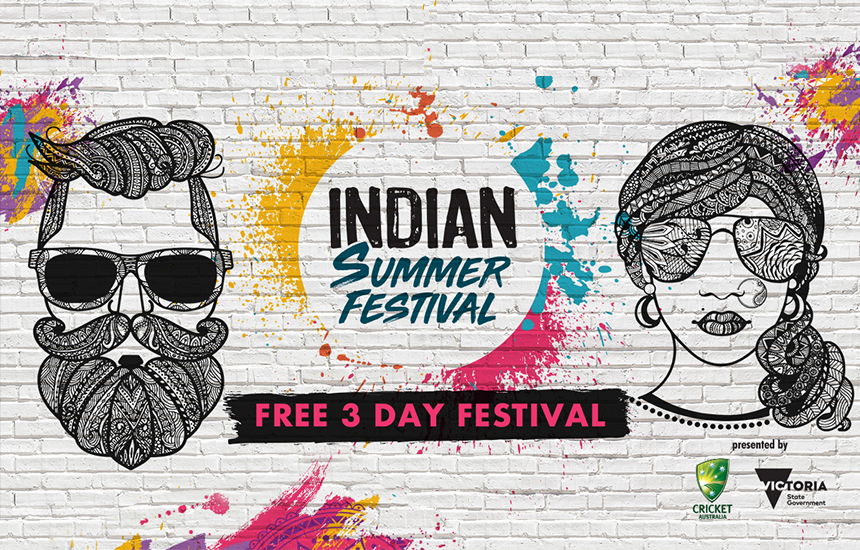 Cricket Australia, in partnership with the Victorian Government, has announced a free, three-day festival to coincide with the 2018 Domain Boxing Day Test

Cricket Australia, in partnership with the Victorian Government, has announced a free, three-day community and cultural festival to coincide with the Domain Boxing Day Test between Australia and India.

The Indian Summer Festival, to be hosted in Yarra Park outside the MCG, will celebrate Victoria’s vibrant Indian community with a program built upon five shared cultural pillars that unite modern India and modern Melbourne: Food, Music, Art, Film and Cricket.

The festival will begin with the Bupa Family Day on 23 December before the main two days of the event kick-off alongside the Boxing Day Test on 26 and 27 December. The family day will run all day from 10.00am-5.00pm, while the final two days will extend into the evening, finishing at 9.00pm.

The Bupa Family Day will feature both the Australian and Indian men’s Test teams on stage for a chance for fans to meet and greet their heroes! There will also be a number of cricket-based activities and other festival fun that the whole family can enjoy.

The festival will continue on 26 and 27 December, featuring live music, street art from both Indian and Australian artists and an open-aired Bollywood cinema along with the best modern Indian food Australia has to offer.

The music line-up features headliners Raxstar, L-Fresh the Lion and Ecca Vandal over the three-day event with support acts from American artist Pavvan, Pav Dharia and Canadian Humble the Poet.

The Indian Summer Festival offers a great chance for local Melbournians to experience modern Indian culture alongside the excitement of the Boxing Day Test. The free event is open to everyone. If you want to sample some of the best that modern India has to offer all you need to do is show up on any of the three days.

“Cricket is a shared love of Australia and India, and we see this passion in the incredible on-field performances whenever our teams meet as well as the huge show of support from fans of both countries in the stands. We expect that the Boxing Day Test this year will showcase all of this and are sure the Indian Summer Festival will make the occasion even more special.

“It is wonderful to be working with the Victorian Government on the Indian Summer Festival, a celebration of the relationship between Australia and India, the vibrancy of the Indian community in Victoria, and the many things that unite us, with cricket as a central theme.”

For more information about the Indian Summer Festival visit http://www.indianfestival18.com.au/