Cricket continues to press for progress 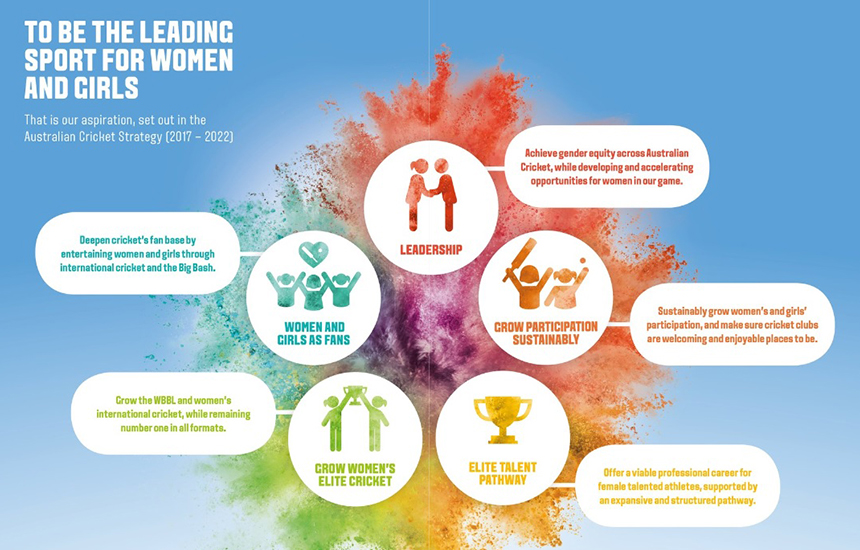 The continual growth of girls participation and all-girls teams, the transition to a standalone rebel Women’s Big Bash League, as well as the unforgettable and inspiring ICC World T20 victory by the world champion Australian Women’s Cricket Team are all noteworthy achievements highlighted in the Australian Cricket 2019 Press for Progress Report, released nationally today.

Report: Click here to read the 2019 Press For Progress Report

In line with International Women’s Day, Australian Cricket’s launch of its second Press for Progress Report reflects the commitment to be openly accountable for the ongoing progress towards our aspiration of being Australia’s Leading Sport For Women And Girls.

Cricket Australia CEO Kevin Roberts said while there had been solid progress in the report findings, he also acknowledged there is still much to achieve in order to achieve true gender equality in cricket.

“Key to our commitment is being transparent and not shying away from our challenges: overcoming the perception that cricket is still ‘not for girls’, continuing to draw women’s elite sport into the public arena, and authentically prioritising workforce diversity across the country,” Roberts said.

“While we’re proud of the progress made, we know and are committed to this and for the first time we share our 2022 national targets that collectively across Australian Cricket we are all working towards.”

International Women’s Day 2019 also marks the one-year countdown to the women’s final of the ICC T20 World Cup in Australia, at the MCG.

All Australians have the opportunity to create history, as we look to break the world record for the highest ever attendance at a standalone women’s sporting event on Sunday 8 March 2020.

The boldness of this goal has led to Cricket Australia partnering with International Women’s Day on a content collaboration recently released, calling on sports globally to share what they are doing to drive forward gender equality in sport.

“Ultimately, success will be achieved when cricket is viewed as a genuinely gender equal sport, aligned with this year’s theme for International Women’s Day: Balance for Better, which highlights that each and every one of us has a role to play in creating a gender-balanced world,” Roberts concluded.