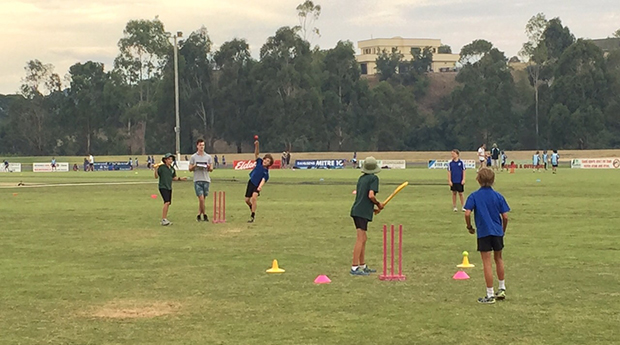 The Harmony 8s School Cup competition offers students the opportunity to get out of class and onto the ovals.

“Any school with a Koori population are asked if they would like to enter the carnival,” Wood said.

“Teams are then formed with girls and boys choosing a non-Koori mate, forming teams of eight.

“The main aim initially was to engage Koori kids playing cricket whilst also increasing the understanding of other cultures, particularly Aboriginal culture.

“We play the MILO T20 Blast format, which allows each team to play three round-robin games on the day.

“We have run competitions this year in Newborough on March 19 at Burrage Reserve, in Bairnsdale at Wy Yung Reserve on March 23 and in Wonthaggi on April 15.

“At Bairnsdale we had over 380 kids participate on the day.”

Wood said that some of the children have continued their cricket after participating in the tournament.

He also said however, that having children participating was an achievement in itself.

“They were all at some stage found through school programs.

“Some of the schools that compete don’t have a P.E teacher, so training prior to the tournament is limited or not held at all.

Cricket Victoria Multicultural Officer Waddington Mwayenga attended the Bairnsdale carnival and was impressed with the skills and the level of enthusiasm on display.

“It was great to see the kids playing cricket and having fun,” Mwayenga said.

“Throughout the day my role was to spread the Harmony in Cricket message, which is cricket is a game for everyone.

“We also spread the message of healthy eating and the importance it plays in providing energy for the body.

“Any program that aims to grow the game to the wider community is a win for cricket.”