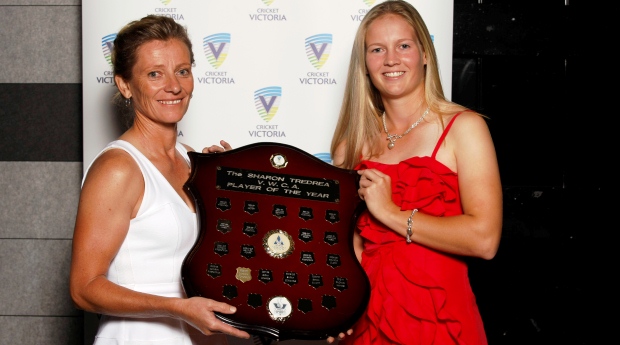 Perennial run-machine Chris Rogers has claimed his second Bill Lawry Medal during this evening's State Cricket and Media Awards at The Olsen Hotel.

Awarded to the Commonwealth Bank Bushrangers’ Bupa Sheffield Shield Player of the Year, the 35-year-old, who finished second on the competition run-scorers’ list with 742 at 49.46 including three centuries and a half-century, previously won the accolade during his debut season with the side in 2008-09.

During another stellar summer, Rogers recorded a number of personal milestones, passing 9000 Shield runs and climbing from 23rd to 14th on the all-time run-scorers’ list as he edged out John Hastings and Clint McKay for the gong.

The Dean Jones Medal was awarded to Aaron Finch following another outstanding season at the top of the order where he amassed more runs than any other player in the RYOBI One-Day Cup.

Finch blazed 504 runs at an average of 84 and a strike rate of 98.05 including a highest score of 154, surpassing Brad Hodge’s Victorian record of 144 in the process.

David Hussey, who finished second on the competition run-scorers’ list with 355 at 71, was narrowly beaten for the Dean Jones Medal, with Hastings also in contention.

Earlier in the night, Finch underlined his credentials as one of Twenty20 cricket’s most destructive forces with his second straight Player of the Year Award for the Melbourne Renegades.

Having captured the inaugural Award in BBL|01, the Renegades captain took his game to lofty new heights this season as he was also named the KFC T20 Big Bash League’s Player of the Tournament.

Opening the batting, Finch finished second on the BBL run-scorers’ list with 309 at 77.25.

Sling king Lasith Malinga was similarly recognised by the Melbourne Stars with the Player of the Year Award during an incredible debut season.

Having parachuted his way into the Stars’ line-up for BBL|02, Malinga captured 13 wickets at 10.69 including the second best Twenty20 figures of all-time with 6-7 against the Perth Scorchers.

Widely regarded as one of the game’s most lethal exponents, Malinga enhanced his reputation playing for the Stars this season as he claimed a top-three finish in the BBL Player of the Tournament.

For a successive season, Meg Lanning won the Sharon Tredrea Award as the WNCL Player of the Year.

The Commonwealth Bank VicSpirit opener was the highest run-scorer in the league with 509 runs, the highest total since Karen Rolton’s 553 in 2005-06.

Lanning’s finest innings came against ACT Meteors in Manuka Oval when she amassed a WNCL record 175 from just 143 deliveries.

Emma Inglis was rewarded for another fine season behind the stumps, as well as her contributions with the bat where she scored 169 runs at 28.16, with second place.

In third place was Lanning’s opening partner Elyse Villani, who enjoyed an impressive season which included a brilliant 173 against South Australia.

Having won a recall to the national fold during the summer, Villani also clinched her first Cathryn Fitzpatrick Award as the WT20 Player of the Year.

Lanning finished in second place after topping the VicSpirit run-scorers’ list with 294, while Inglis finished third after she struck 164 runs and also picked up four catches and nine stumpings.