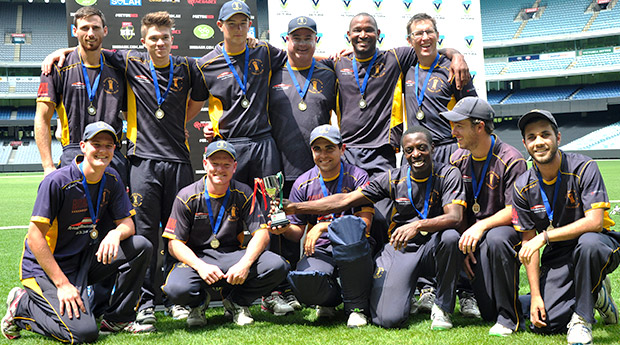 The Doutta Stars have won the Regional Big Bash final by six wickets after opener Ben Speake hit the penultimate delivery for six to claim the title against Tallangatta.

Tallangatta won the toss and elected to bat in the Regional Big Bash final at the MCG against the Doutta Stars.

Doutta did well to restrict Tallangatta to 123-6 after a good opening stand of 52 between Trent Ball and Torquill McKillop.

The first five overs went for 29 with Ball on 19 and McKillop eight.

Despite coming off a few paces Parchment still bowled fast but coming into the attack bowled a slightly wayward and expensive over which went for 12 runs.

The run rate was brought back under control in the following two overs and in the ninth the Stars got the much needed breakthrough.

Tankard broke the opening 52-run stand as he bowled Ball for 27 off 24 as the batsman looked to moved away from his stumps and was bowled. Ball swung hard but failed to connect as the ball clattered into his stumps.

As is often the case when a wicket falls the dismissal is followed by several more. In this instance, in the 12th over, and just 2.2 overs after the first wicket, Tallangatta’s solid platform was crumbling. The West-Indian first-class bowler, Ingram, had new batsman Thompson caught for a single as he attempted to sweep the spinner. Three balls later Ingram picked up his second. Ingram claimed the important scalp of McKillop for 32 as he was caught at mid-off by Tankard with the score on 66.

Allan and Armstrong then formed an important 39-run partnership which was broken in the 17th over as the pair looked to increase their run rate. Opening bowler, Jeremy Peacock, returned to the attack and had Armstrong caught by Mark Rossitto for 11.

Parchment took it upon himself to perform the captain’s role and bowled the final over. He secured a direct-hit run out of Allan for 33 – the top score of the innings – with the first delivery and claimed the wicket of Weighell caught Rossitto for ten with his final ball as Tallangatta posted 123-6 from their 20 overs.

James Weighell and Sam Stephens opened the attack with the first two overs going for just one run. Weighell started the innings with a maiden to Speake.

After four overs the Stars were 0-15, 20 runs behind where Tangaratta were at the same stage.

In the fifth over former West Indian cricketer, Parchment, and captain of the Stars showed his experience as he hit three fours in the over to see the team to 0-29 at just below the required run rate of 6.2.

Had Parchment continued in that attacking manner the game would have been won rather quickly. But first-change bowler Nathan Thompson sent him back to the dug-out as he skied one to the wicketkeeper who did well to take the catch after mistiming it.

With the skipper gone for 23 off 17 with the score on 32 and the stars already in their sixth over it was always going to be a tough chase.

Parchment’s wicket brought Lorenzo Ingram, a former firstclass cricketer, to the crease and he continued where his countryman had left off.

In the eighth over Ingram hit one of the best shots of the day – a six straight back over the bowler’s head. After this over though he got tied down and went for a sweep shot in the 13th but was trapped lbw by Brett Allan for 27 with the score on 70.

Tight bowling from Tallangatta meant Doutta had to run hard between the wickets to avoid falling too far behind the required run rate.

Eventually though big shots are attempted as singles will see them fall short of their target. This brought the third wicket as James Vistarini was caught by Allan off Mat Armstrong for six with the score on 80.

In the 17th over, two overs later, Tallangatta claimed their fourth and it looked like victory was theirs. Ben Tankard was caught by Torquill McKillop for three off Sam Stephens with the Stars on 91.

Despite a slow start, Speake showed the frequent importance of having a player bat through the innings. On strike for the penultimate ball of the match he was 40* with the Stars requiring five runs to win. Despite the pressure he struck the ball for six and secured a six wicket win.

Congratulations to player of the match, Ben Speake, for his match-winning and patient innings of 46*.

Well done to the Doutta Stars on their win and to Tallangatta for helping to produce such a competitive game of cricket.