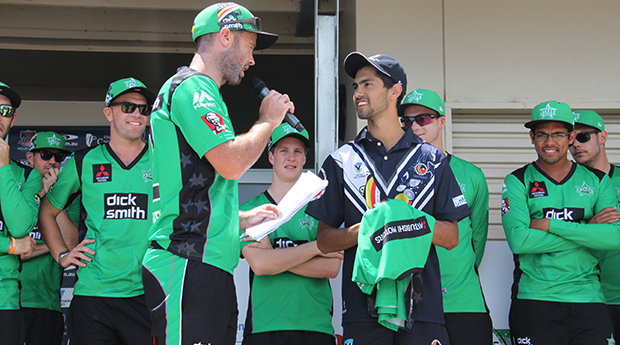 Essendon Cricket Club's Josh Eaton experienced a whirlwind of emotions when he was announced as the Melbourne Stars' BBL|04 Community Rookie at the team's Family Day at Casey Fields.

The left-arm pace bowler was left stunned in front of family and friends when he heard the news, and now a month in to his contract, Eaton is relishing the opportunity to learn from the best in the game.

“To be around guys like Kevin Pietersen, Sir Viv Richards and Cam White has been amazing and I’m still pinching myself,” Eaton said.

“It’s been good for me to learn from James Faulkner who is a left-arm paceman, so I’ve gained some useful tips from him.

“Just to see their preparation and how many balls they hit and bowl prior to a match has given me a real insight into elite cricket.”

Starting his cricket career as a seven-year-old at St Francis de Sales Cricket Club, Eaton immediately fell in love with the game, first starting to develop as a paceman playing in the Under-15 Hatch Shield.

After spending nine years at St Francis de Sales, he moved to Bartercard Premier Cricket Club, Essendon where, over time, he has progressed from the thirds to the firsts, learning from fellow pacemen.

“Clint McKay, Louis Cameron and Matt Doric have been important in helping me to improve and I’ve picked up on tactics on how to get batsmen out from them,” Eaton said.

Eaten is also a member of the Victorian men’s Imparja Cup team, who will travel to Alice Springs in February in search of it first piece of silverware.

Committed to developing Victorian Indigenous cricket, the Stars again bolstered the Community Rookie contract to create a 12-month Indigenous scholarship which will assist Eaton in his post-season development.”

“I would like to thank the Melbourne Stars for giving me this opportunity to be a part of the squad and being able to see how elite cricketers go about it,” Eaton said.