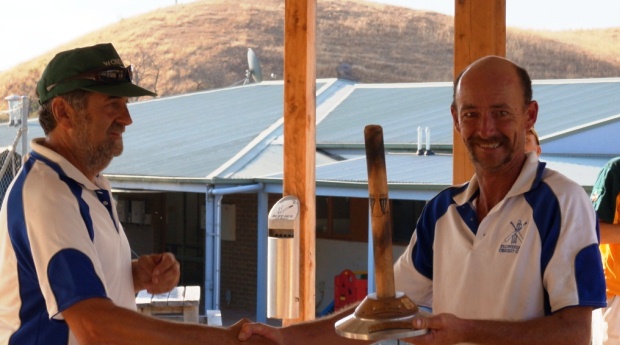 Flowerdale has retained the Black Stump Trophy after accounting for Strathewen in the final of the quadrangular Super8 series between bushfire-affected communities.

Earlier this month, Flowerdale hosted the Kinglake, Strathewen and Marysville cricket clubs in a new format for the four clubs which have played each other in Twenty20 matches since the first anniversary of the Black Saturday bushfires in 2010.

The format was changed to a Super8 competition to allow the four clubs to play at the one ground and maximise crowd participation.

With a crowd of more than 100 in attendance, $750 was raised for the CFA and the Dunalley Primary School in Tasmania, which was recently affected by bushfires.

“It was the best day of cricket that we’ve had.

“We managed to raise some money for the local CFA and the Dunalley Primary School… and hopefully we can continue to grow this competition in the coming years.”

The Black Stump trophy was made by Ian McHenry, then associated with the Kinglake Cricket Club, from the burnt remnants of a cricket stump and a wheel rim, rummaged from the remains of the Ash Wednesday and Black Saturday fires.

Flowerdale’s Jimmy Stephens was named player-f-the-day, while 76 boundaries and 30 sixes were struck during an action packed day.