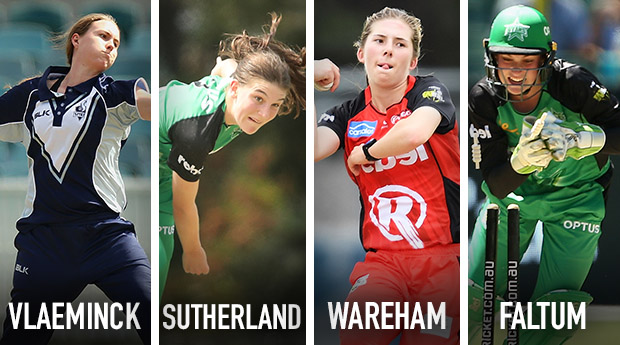 The Cricket Australia Women's Youth Selection Panel (WYSP) has today named a 14-player Australian Under-19 squad to travel to South Africa in April to take part in a tri-series with South Africa and England.

The tour will be the first time Australia has sent an Under-19 women’s team overseas, and the first time the side has played in 15 years, having last played in a 2003 series against England.

The tri-series will pit Australia against South Africa’s Emerging Women and England Women’s Academy across four 50-over matches and two Twenty20s. The final will be played as a 50-over match on 28 April.

The leadership duties will be split across the formats, with 16-year-old all-rounder Rachael Trenaman named captain of the 50-over side, with Tasmanian Courtney Webb her deputy, whilst Saskia Horley will lead the T20 side with the support of Annabel Sutherland.

Speaking about the addition of an Under-19 tour for the first time in more than a decade, Cricket Australia High Performance Coach and Under-19 Head Coach Leah Poulton said:

“I think it just goes to show how fast the female pathway has moved over the last few years. It’s an exciting time for women’s cricket and if Australia wants to stay at the top we really need to invest in our pathway, which I believe we’re doing well.

“The tour presents a really good opportunity for the players to get a taste of what it’s like to be in an elite touring environment. Putting your skills to the test in a variety of different conditions and situations is an essential part of being an elite cricketer.

“England and South Africa are two very good teams who will present some good challenges for the group. We want the players to be tested and to be pushed outside their comfort zones and to have to adapt to the different situations they find themselves in. This is a really exciting group of players who I think all have big futures in the game so I’m looking forward to seeing how they perform.”

The re-introduction of an Under-19 side follows a restructure to the female pathway last year which brought it in line with the male pathway, with an Australia A side, Cricket Australia XI and National Performance Squad replacing the previous Under-21 Shooting Stars.