Funding for the Victorian Cricket and Community Centre fast-tracked 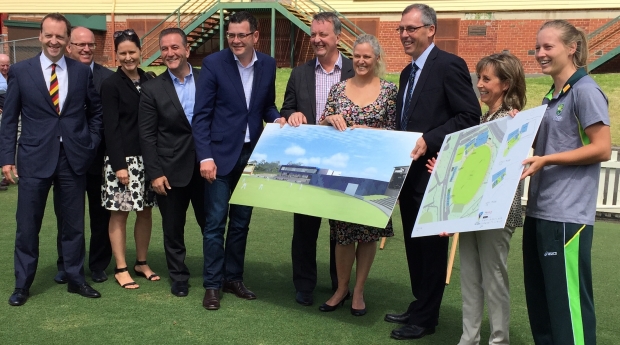 Cricket Victoria and Cricket Australia today welcomed the announcement by the Andrews Labor Government of the fast tracking of funding for the Victorian Cricket and Community Centre at the Junction Oval.

The purpose built facility will consolidate Cricket Victoria’s administration, development and training functions into a single location, as well as providing a boutique-sized alternate first-class venue for the Commonwealth Bank Bushrangers and VicSpirit.

The Victorian Cricket and Community Centre will also house the National Centre for Diversity through Cricket, which has been designed to promote social inclusion and harmony in the community through cricket.

The state-of-the-art facility will provide enormous benefit to a variety of stakeholders including Indigenous, deaf and physically and intellectually impaired participants and the state’s elite teams including the Melbourne Renegades and Melbourne Stars.

“We thank Premier Daniel Andrews, Minister for Sport, John Eren and the Victorian Government for their strong commitment to a cricket-only development at the Victorian Cricket and Community Centre, which will deliver enormous benefit to the whole community. Victoria enjoys the highest level of participation in Australia’s favourite sport and this long awaited and greatly needed boost to Victorian cricket will enable it to grow and flourish for generations to come.”

“There are many people who have been working hard over a long period to ensure that this critical project became a reality. Now that it is up and running, Cricket Victoria is ready to honour its commitments and collaboratively advance the project on timelines set with the Victorian Government. The construction phase alone will create many jobs and, once in operation, the Victorian Cricket and Community Centre will continue to provide important economic benefit to the state.”

“We highly value the wonderful, broad support of the local community, Member for Albert Park, Martin Foley, sporting clubs, park users, and other groups, without whom this project could not proceed. Developing a facility that will be an asset to all members of the community long into the future was a key driver in our determination to rejuvenate and revitalise this iconic ground.”

Construction for the project will now commence in 2015 with completion due by the start of the 2017-18 season.