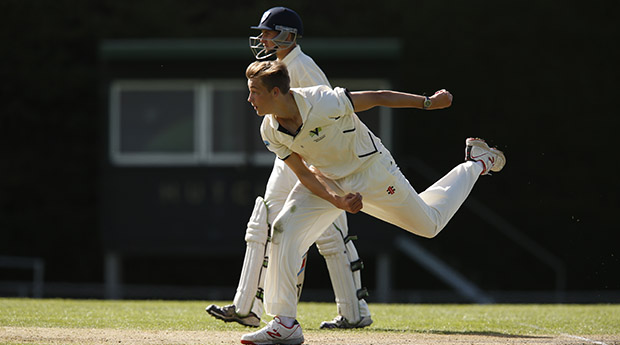 An incredible hat-trick by Victorian Josh Hudson sparked an unexpected opportunity for our under-17s to make a late charge at the championship, only to be out-classed by NSW Metropolitan in the final session of play.

On the final day of the championships, Victoria couldn’t have started in better fashion as they dismissed the eventual tournament winners for just 88 within the first two hours of the day.

At one stage, NSW went from 3-45 to 8-50 thanks to Hudson’s hat-trick and a double-wicket maiden from Xavier Crone.

With an outright win the only possible way of giving Victoria a chance at winning the championship, it was over to our batsmen to extend the lead in quick time.

It didn’t begin well though, as the Vics suddenly found themselves two wickets down for just three runs after losing skipper Will Pucovski (0) and Ryan Hartley (3) early.

In-form batting pair Matthew Underwood and Nick King came to the rescue however, boosting Victoria’s lead to a seemingly unbeatable 230.

Underwood made a quick-fire 78 in what was his second half-century of the championships and King added another 33 runs to his impressive tournament tally.

With nothing to lose, Victoria declared, putting the pressure back on NSW.

The stakes were high for both sides: the Victorians needed an outright win to snatch the championship from their opponents and NSW now found themselves needing a “reverse-outright” win to prevent ACT/NSW Country from taking home the trophy.

In what was an impressive run chase, NSW simply looked like a different batting side to the one that showed up in the morning session.

They reeled in the target of 230 without an issue, losing just four wickets in 48.2 overs.

The wicket takers for Victoria were Grimwade (2), Hudson and Crone (1).

All credit goes to the NSW boys as they took their second outright win of the championships, sealing the top prize ahead of ACT/NSW Country in second place and Victoria third.

For the Vics, they had a number of brilliant team performances throughout the tournament as they consistently took top-order wickets early in their bowling innings and fought their way through mini-slumps with the bat with maturity beyond their years.

Matthew Underwood finished the tournament as the sixth highest run scorer (221 at an average of 44.2) behind South Australia’s Patrick Page Junior who took out Player of the Championship honours with 391 runs at 78.2 (including two centuries).

Victoria didn’t go home empty handed, however. Wicket-keeper Ryan Hartley won the fielding award for the most dismissals after the brilliant achievement of 18 catches over the five matches.

Congratulations to the boys on a gallant effort and a well-deserved third place – there’s plenty to like about the future of cricket in Victoria.