Gideon Haigh: Eyes on the prize 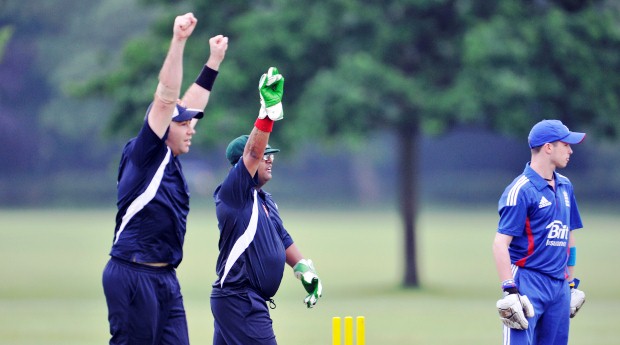 Aged 18, Matthew Horsey undertook a rite of passage common among a majority of young Australians: he took driving lessons, in order to obtain his licence.

But when the day came for the test, the examination took an unexpectedly more serious form.

“I did my lessons, went through the whole learners’ thing,” says Horsey.

“Then when I turned up to take the test I couldn’t see the eyechart.  I didn’t even take the test.’ It was, he recalls, ‘a long trip home on the tram.”

Seventeen years later, a man with ten per cent vision but 100 per cent commitment, Horsey is about to undertake a sporting rite of passage, by captaining his country against the best in the world at blind cricket.

The 17-member squad embarked yesterday for the inaugural blind cricket T20 World Cup, to be held over 12 days in Bangalore.

The tournament will involve nine of the 10 members of the World Blind Cricket Council, founded in New Delhi in September 1996, and responsible for the first World Cup in the same city just over two years later.

A second was played in Chennai in December 2002, a third in Islamabad four years after that.

The latest tournament is again being hosted by the Cricket Association for the Blind in India, this time in collaboration with Samathanam, a Bangalore-based NGO with a focus on disability.

As the foregoing suggests, the vision impaired game has come to be dominated, rather like the sighted version, by the sub-continent, especially Pakistan, who have won the last two Cups, and 10 of their last 11 series.

Their feats are often epic: in a recent one-day game against England, Pakistan’s openers put on 374.

So, adds Horsey, are their advantages.

“Pakistan have a big population, more blind people, more disability generally; India also have a large pool to draw on. We probably only have 4-500 players to pick from.  They have tens of thousands.”

Pakistan’s blind cricketers actually play as professionals; Australians are amateurs, with Horsey, for instance, paying his own airfare and taking his laptop on tour so he can continue running his web design business from afar.

It was first played 90 years ago, being improvised with a ball made from a tin can filled with stones by residents of a hostel in Prahran.

In 1928, the Royal Victorian Institute for the Blind opened clubrooms at a ground in Kooyong, where the game is still played.

Victoria has traditionally dominated the game, reaching the final of the biannual national championship held since 1953 in all but a handful of years, and remains the dominant state, providing 15 of the Australian squad.

An audible ball filled with bearings is bowled underarm at steel stumps slightly larger than those in sighted cricket, and must bounce twice before it reaches batsmen who play low, and hit in a scything motion.

Australians have been famous for issuing verbal advice in cricket, but blind cricketers take it to another level; their games are as a non-stop noisy as the cawing of a flock of gulls.

Horsey was introduced to blind cricket at university.

“I knew blind cricket was around,’ he says, ‘but I thought it was for people who couldn’t see at all.”

B1s must bowl a minimum of 40 per cent of the overs in an innings, and are credited with double the runs they score off the bat.

Horsey turned out to be a B3, and is unusual in having played the game while sighted.

Before that driving test, he had been an average sports-mad youth out in Braybrooke: “I had a normal childhood, played all the sports including cricket and footy.  A lot of street cricket in summer – everyone played it. Summer was cricket, winter was footy.”

That early grounding has been a great advantage: “Those that have grown up playing [sighted] cricket have a big advantage, although they are in the minority. You can walk onto the field and dominate the game because you have a sense of what it looks like.”

Horsey did indeed have an immediate impact, making 91 on debut in the World Cup a decade ago, is now a veteran with an acute tactical understanding.

Key positions in blind cricket, he explains, are those of boundary sweepers, who tend to be the least visually impaired.

The best of these are usually sufferers from a condition called retinitis pigmentosa (RP) – tunnel vision.

“You have to hit the ball and run, and take a lot of twos, because teams tend to put their best fielders out on the boundaries to stop fours.  If have an RP player….they can see as sharply as you can; they just don’t have the peripheral vision.  So they can pick the ball up the ball off the bat, sweep, and get the ball in like a sighted player.”

“We need our RPs to start breeding,” says Horsey wryly.

What Australia has at its disposal is pace.

“We have three of the best four bowlers in the world,” says Horsey.

“If the pitch has any life, we can take advantage of it.”

Where they stack up a little less well, admits Horsey, is youth.

The baby of the team is 18-year-old Daniel Pritchard, while vice-captain Matthew McCarthy, Corey Heberley, Mark Haskett and Heaven are in their twenties, but the rest of the squad are over 30.

“They are our best,” argues 35-year-old Horsey.

“They still get the job done.”

They’ll be tested by a schedule which were it any tougher might generate complaints of burn-out.

After the opening ceremony at Kanteerava Stadium on December 1, the Australians play their eight games on consecutive days, against India, West Indies, Sri Lanka, Pakistan, Nepal, Bangladesh, England and South Africa, and only enjoy a bye on the eve of the semi-finals.

Here’s a game, nonetheless, where playing is a genuine joy and liberation, and, as in life, you learn to deal with challenges.

If they bring their ‘A-game’, as Horsey puts it, the Australians will play India in the semi-final on December 12 and Pakistan in the final the next day, both of which are to be televised on India’s national broadcaster, Doordarshan.

For a man with 10 per cent vision from Braybrooke, that’s quite a prospect.

Reserves
B3 Jespah Soegeng, B2 Neil Massey and B1 Brendan Spencer.

For more cuts and glances from Gideon Haigh, click here.