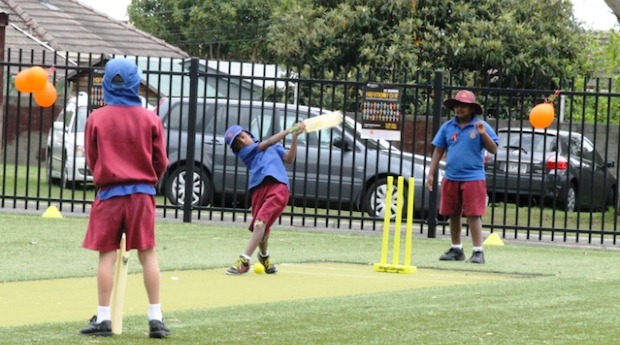 In conjunction with Cricket Victoria, the day saw students from St Anthony’s play for the Harmony In Cricket World Cup, recognising the importance of cricket’s role of bridging cultural divides.

Celebrated annually, the Harmony Day message, ‘Everybody Belongs’, resonated with participants whose backgrounds included those with heritages from Italy, India, Sudan, Vietnam and Sri Lanka.

St Anthony’s, located in the multicultural suburb of Noble Park in Melbourne’s south east, represented four International cricket teams made up of Australia, India, Sri Lanka and the West Indies.

Players wowed fellow schoolmates, who watched from the sidelines and cheered every boundary and wicket.

Harmony In Cricket Ambassador Kevin Tissera was delighted with the day and hoped the day would expand in years to come.

“It was a fantastic day and highlighted cricket’s ability to unite communities, irrespective of race, religion, ability or gender,” Tissera said.

“Hopefully the Harmony in Cricket World Cup can develop in later years to include surrounding schools.”

Harmony In Cricket World Cup organisers would like to thank Marilyn Cuddihy, Aaron Dragwidge, Liz Zappia, Kevin Tissera and Harry Fernando for their involvement with the day, and Accolades and More who supplied the World Cup trophy.

Having claimed a 4-0 Test series victory on the sub-continent against Australia, India prevailed on the day and took home the inaugural Harmony In Cricket World Cup during a memorable affair.