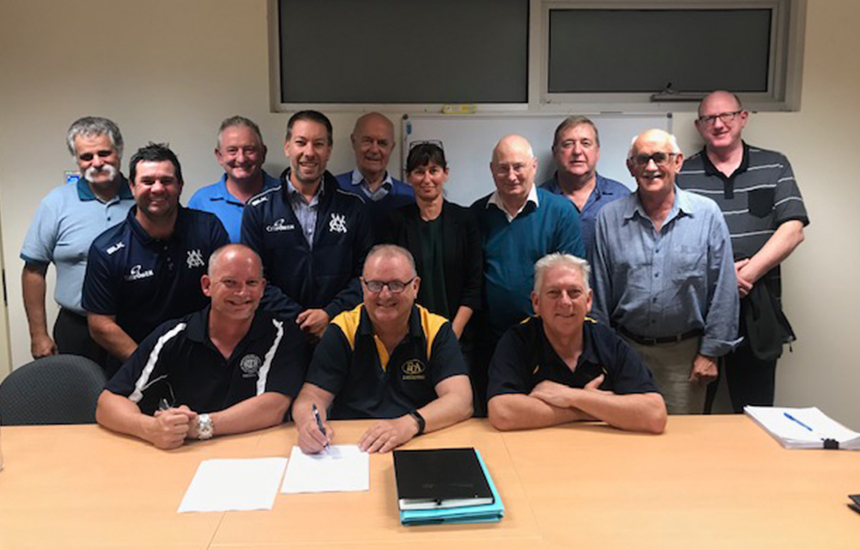 All four organisations met on Tuesday to sign the document, becoming the second Melbourne metropolitan region to do so – after the Inner South East Cricket (ISEC), South East Cricket Association (SECA) and Cricket Southern Bayside completed a Heads of Agreement in May.

The Associations and their member clubs have agreed to collaborate on the shape of the regional model and how it could benefit clubs and participants in the region in the short and long term.

These discussions will address a range of key factors including governance, history and finance and administration  to deliver a robust structure for the game to thrive in Melbourne’s east.

The Collaboration Group  has been chaired by Dick Menting and represented the views of key stakeholders in the region before the historic signing.

It is expected that Associations and their clubs will be in a position to consider a recommended transition plan that is likely to commence in 2019/20 and build over the subsequent season.

President of ECA Mike Slattery said it was a significant early step.

“It has been a thorough process to get to this early stage and we took our time to get the Heads of Agreement right to make sure that we were comfortable with it”. Slattery said.

“We were very pleased with the way that the three Associations and CV were able to work together to get to this stage and our clubs voted almost unanimously for us to sign the document to move to the next stage.”

President of the RDCA Mike Finn outlined the desire to preserve history and meet future demands.

“At the RDCA we have always prided ourselves on not only recognising and respecting traditions and history but also looking to be progressive to ensure cricket remains relevant,” Finn said.

“With a significant majority of clubs supporting us to sign the Heads of Agreement we have a strong mandate to explore this next phase. We will go in to the next stage with the intention of seeing whether our clubs and participants will be better off.”

President of the BHRDCA Peter Rosenthal highlighted how there is much work to do.

“Given that we are only at the stage of agreeing to work collaboratively together, we felt that it was a no-brainer to work with CV and the other two Associations to investigate the options,” Rosenthal said.

“We look forward to getting our teeth into the detail of how it may all play out.”

Cricket Victoria’s General Manager of Community Cricket Rohan O’Neill said the signing of the Heads of Agreement with the ECA, BHRDCA and RDCA was another key milestone.

“We are delighted that Eastern, Box Hill and Ringwood have agreed to further explore how a collective approach to cricket in the East can benefit the game,” O’Neill said.

“We know that the next stage will flesh out some more detail, however it’s pleasing that all parties wish to work together in a bid to improve the game and embrace an ever-changing environment of community sport.

The Heads of Agreement builds upon the Melbourne Metropolitan Cricket Strategy,  a co-designed blueprint for the future of community cricket that was released in May 2017.