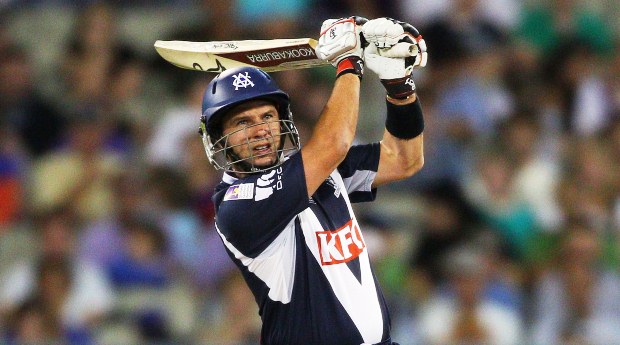 The past and present of the Commonwealth Bank Bushrangers will carry Australia's hopes at the Hong Kong Sixes later this month.

Brad Hodge, who retired last summer having scored more runs (5597) and struck more centuries (20) than any other player in domestic one-day history, will captain-coach the outfit that contains Victorian under-19 captain Meyrick Buchanan.

Turning out for Australia for the first time since playing his sixth and final Test match in 2008, the 37-year-old said he was looking forward to pulling on the green and gold once again.

“I’m excited about the tournament, especially because it’s been a long time since I’ve put on the Australian colours,” Hodge said.

“I’ll be taking on a bit of a mentoring role as coach and captain and I look forward to sharing my knowledge with the guys, particularly with someone like Meyrick Buchanan, who’s still only a teenager but has been very impressive so far.

“I think it will be a great learning experience for all of us and a good opportunity to find a bit of form before the start of the Big Bash League.”

The tournament takes place at the Kowloon Cricket Club on October 27 and 28.

The squad was selected by the National Talent Manager Greg Chappell, in consultation with the National Selection Panel.

“We have a good mix of youth and experience in this squad and the younger squad members will benefit from Brad Hodge’s presence as captain-coach,” Chappell said.

“Australia has a good record in Hong Kong and this tournament has exposed the talent of the likes of David Warner in the past. No doubt Brad will be keen for his team to acquit themselves well.”

Each game consists of a maximum of five six-ball overs bowled by each side, which is increased to eight-ball overs in the final.

Australia won the tournament in 2010, when David Warner and Bushranger Ryan Carters hit 48 runs from the last over of the final to give Australia victory.

Following the final, Warner was called up for international T20 selection.