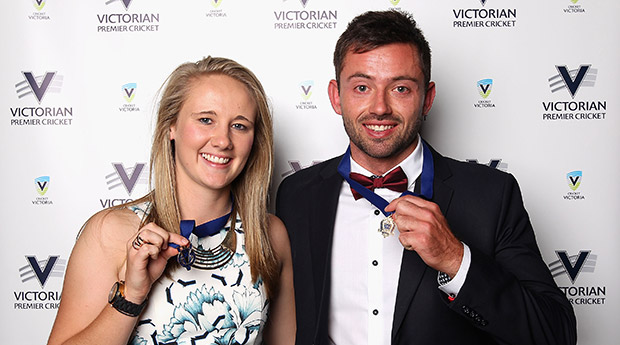 Heading into the final round, Chasemore held a two vote lead over Dean with Holland a further vote back.

A spell of 3-15, coupled with 37 with the bat, was enough for Holland to claim five votes in the final match to finish a vote ahead of Chasemore, and four ahead of Dean.

It is the fourth year in a row that Chasemore has finished in the top three.

He also became just the second player to make a hundred and take a five-wicket haul in the Premier Cricket Final and is now the first player to win the Ryder and Scholes Medals in the same season.

Lanning, who turned 21 last week, scored 446 runs, the sixth most in the competition, and also claimed 22 wickets.

She polled in eight matches to finish with 30 votes, four ahead of sister Meg, while Molly Strano finished in third place with 26 votes.

A best on ground performance in the third last round against Melbourne, where Lanning struck an unbeaten 97, was enough to put the count beyond doubt heading into the final two matches.

Carlton was awarded the JA Seitz Club Championship while presentations were made to all premiership winners, including Bartercard Premier Cricket 1st XI winners Ringwood and Box Hill.

In other presentations made this evening, Frankston Peninsula and Essendon Maribyrnong Park were awarded the Spirit of Cricket awards, Graeme Lloyd received the Umpires Recognition Award and Melbourne’s Scott West and Geelong’s Matt Baker were named Curators of the Season.