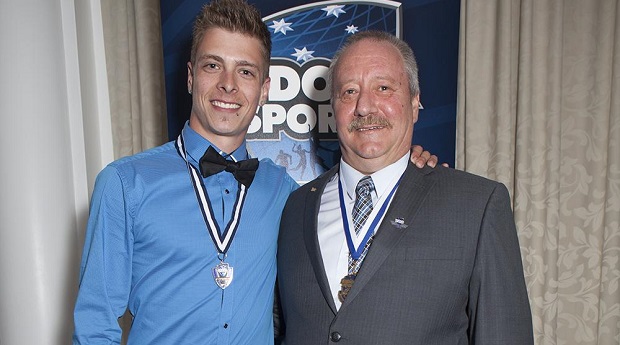 Baker capped off a stellar indoor season, polling 72 votes to take home the Ross Gregory Medal for the best and fairest player.

“It was a great feeling,” Baker said.

“I worked hard for it so it was good that it paid off.”

Baker acknowledged that the accolade was a valued addition to his 2014 premiership medallion, noting that Croydon’s win was a victory to remember.

“It’s been 15 years since Croydon won a premiership so it was a long time coming,” Baker said.

“It was great to get the win for the older guys especially.”

In the Women’s Premier League, Pierce wrote her name in the indoor cricket history books, polling 64 votes to take the inaugural best and fairest award.

“It felt good, I wasn’t expecting it but I was very proud,” Pierce said.

Having played in the Victorian Open Women’s team for the past 17 years, Pierce noted that it had been particularly rewarding to see the Women’s Premier League up and running.

“We put a lot of hard work in to getting the competition going,” Pierce said.

“Teams were divided evenly with state representatives and juniors, which was great because we had the chance to help develop up and coming talent who are the future of our sport.”

The evening also celebrated the achievements of Craig “Dougie” Whitehand who was this year’s sole Hall of Fame inductee.

After dedicating 17 sterling years of service to Victorian indoor cricket, Whitehand was recognised as both a player and a volunteer, helping the juniors come through the ranks.

An outstanding leg-spinner and capable batsman, Whitehand has represented Victoria and Australia, in both indoor and outdoor formats.

Only the second member of Victoria’s Lord’s Taverners side to be inducted, Whitehand noted that it was a great honour and that winning five indoor titles had been the highlight of his career.

“It was a great feeling being inducted,” Whitehand said.

“Winning the 2014 Lord’s Taverners Shield has definitely been a highlight for me.”