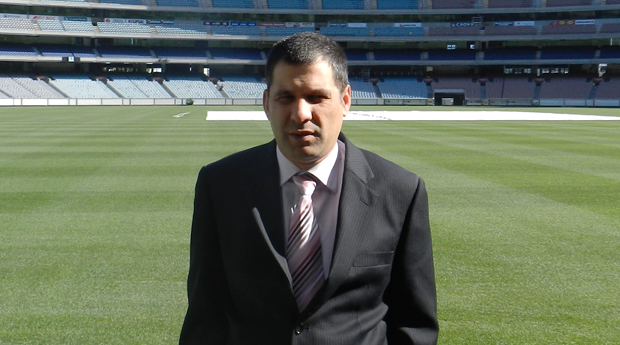 Meet Illias 'Louie' Maravas, a Cerebral Palsy sufferer who doesn't let his disability get in the way of scoring runs, snaring wickets and taking catches on the cricket field.

This week Louie was named Local Sporting Hero of the Year at the Victorian Government’s Community Sport and Recreation Awards, in recognition of his achievements at Highett West Cricket Club.

Louie, 40, hasbeen playing at the club for 16 years and is now a regular feature of the third team after rising up through the ranks.

HWCC President Michael Flahive said his journey is an inspiration to everyone.

“It is a fantastic story,” Flahive said.

“He’s just a typical Melbourne lad. He loves his cricket and he loves his footy. Louie took a catch last week – you should have seen the excitement both on the ground and back at the club afterwards.

“We’d like to recognise the CMCA (City of Moorabbin Cricket Association), in particular our opposition clubs in the low grades, who have treated Louie with the utmost respect and made him an inclusive member of the CMCA for 16 seasons. It was a very proud moment for us and a wonderful achievement for Louie.”

His influence is such that the club encouragement award was renamed in his honour in 2006.

Just last season he was awarded life membership, recognising his commitment, determination and significance to the club.

Flahive believes Louie’s wonderful life story is proof anyone can get out there and give cricket a try.

“To us as a whole club, we love Louie and we already know he is a legend. The round of applause he gets for runs and wickets is really amazing and makes us all at the club a few feet taller,” he added.

“We feel sometimes he doesn’t get the coverage he deserves, but I suppose there are a lot of good news stories out there, and he’s ours.”