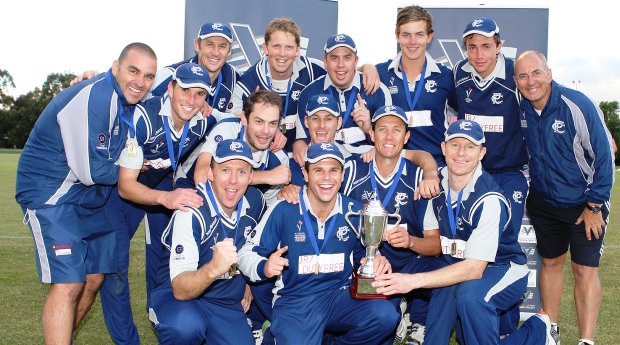 Heavyweights Melbourne and Prahran will meet at the Albert Ground on Sunday (27/1) to contest the Victorian Premier Cricket one-day Final.

Having captured the Twenty20 title earlier this season, the Demons will be looking to repeat the True Blues feat from last season when they collected silverware in both limited-overs formats.

Despite being without Commonwealth Bank Bushranger Chris Rogers and English international Dimitri Mascarenhas, who is playing for Rangpur in the Bangladesh Premier League, Prahran will field a strong side that includes former Test spinner Bryce McGain and their captain Sam Coates knows they will need all their talent to get over the top of the undefeated Demons.

“Melbourne is the best team in the comp, and have been all year,” Coates said.

“We will have our work cut out that’s for sure. It’s at the Albert but that’s probably not a bad thing seen as how our pitch played at the weekend.

“It’s always a great place to play cricket. It’s a great wicket, and a fast outfield, hopefully it will be a high scoring match.”

Melbourne has been in red-hot form all season, led by all-rounder Brenton McDonald, a favourite for the Ryder Medal.

McDonald has claimed 34 wickets, at an average of 14.21, and has also grabbed five-wicket hauls in the past two matches while also contributing with the bat, with 400 runs at 44.44.

In the absence of Brad Hodge, Andrew McDonald and Michael Hill, the Demons will look to their younger players, such as Alex Keath, Jack Paynter and Pat Smith, to reproduce their form which has taken the side to the top of the ladder.

Prahran, who boast short-form specialists such as Daniel Salpietro, Neil Schlitter and Steve Seymour, will be looking for a victory after missing the finals in the Twenty20 competition.

“We were disappointed we didn’t do better in the T20s,” Coates said.

“We are the defending champions in this competition, if we go back-to-back it will be a great achievement… we really enjoy the white ball stuff.”

“The club is a good place to be at the moment,” he added.

“If they get a chance I’m hoping they will take it.”

Melbourne and Prahran meet at the Albert Ground on Sunday from 11am.