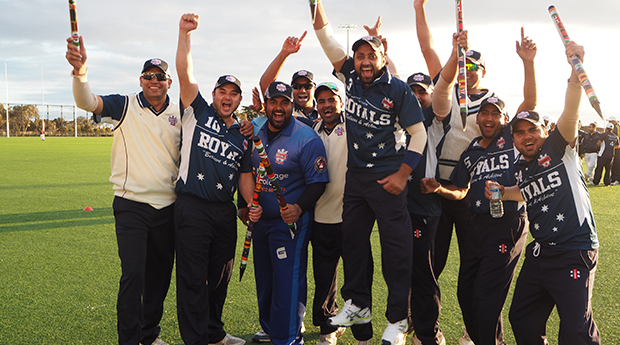 The Melbourne Royals defeated the Northern Royals and were crowned champions in the 120th game of the JPL season.

Entertainment on and off the field was in abundance with traditional drummers, jumping castles, face painting and a DJ, all on hand adding to the electric atmosphere.

The tournament, which began in March this year, saw teams across Melbourne compete in T20 games played on Saturdays and Sundays in cricket’s traditional off-season.

Beginning as social matches played by the Wyndham Jags Cricket Club, its popularity quickly increased amongst the South Asian community and prompted the club to create an organised structured competition in association with Cricket Victoria in 2014.

The tournament, in its second season doubled in size, with 32 teams taking part compared to the previous season’s 16 entrants.

Jaymohan Padmanabhan, JPL Chairman, hopes the competition will continue to grow and cites the tournament’s family atmosphere as a reason for its increasing popularity.

“We are already working on next season and we’ve already heard from new teams wanting to join the next tournament,” Padmanabhan said.

“It’s an exciting time and a large part of our success has been the inclusion of families.

“We had several players’ partners volunteer throughout the season and we had more juniors take part in our programs than ever before.

“Families are vital to our success.”

In the final, the Melbourne Royals won the toss and elected to bat, posting an imposing 7-172 off their 20 overs.

In response, the Northern Royals were bowled out for 124 in the final over, handing the Melbourne Royals a 48-run win.

Vikas Dhingra, who topped scored for the Melbourne Royals and also picked up two wickets, was named Man-of-the-Match.

Cricket Victoria Multicultural Officer, Waddington Mwayenga, who attended the game, applauded the tournament’s multiculturalism as well as the skills on show.

“The tournament is a great showcase of how multicultural Australia is and it also exemplifies Cricket Victoria’s Harmony in Cricket philosophy,” Mwayenga said.

“The standard of the two teams in the grand final was as good as any I have seen in local club cricket.

“These competitions are important because they give the wider community an opportunity to play cricket but they also give the players a sense of belonging to the community.”