International Student Academy students got the full BBL game experience, attending the Melbourne Stars vs Brisbane Heat match at the MCG in conjunction with Deakin University.

The game on Wednesday, February 6, was attended by over 22,000 people with one of the students even managing to make it up on the big screen in an interview with the Melbourne Stars!

The match was a fantastic experience for the students, providing them with a great opportunity for them to socialise with their peers, and enjoy a great game of cricket.

The CV International Student Academy has launched for season 2017-18!

The International Student Academy program aims to use cricket as the vehicle for student wellbeing (physical and mental) and help breakdown the associated barriers to social inclusion. As a result of this partnership, students will be better connected (international and local students) and become ambassadors for Victoria, our tertiary institutions and our sport. 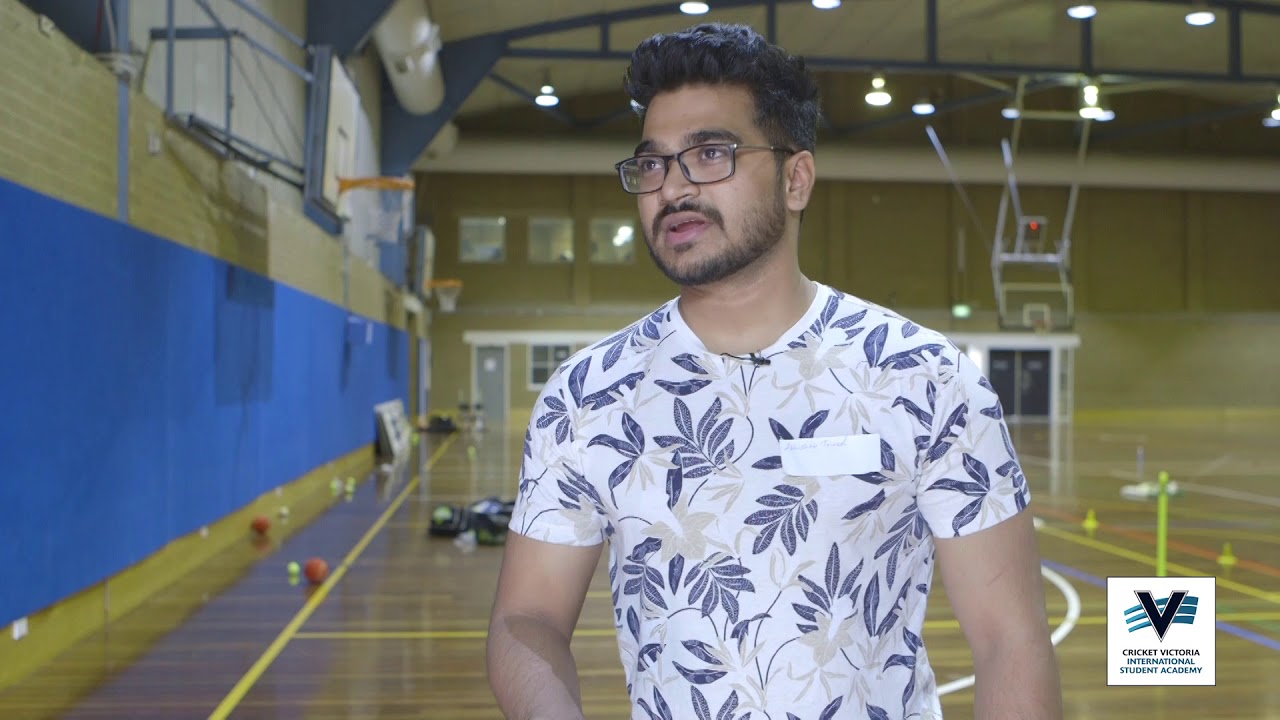 The day provided an opportunity for international students to come together and socialise whilst taking part in a one day carnival and represent their University / TAFE provider within Victoria. The 28 teams across 12 different University and TAFE providers enjoyed both the T10 competitive and six-a-side social divisions on offer, as well as the Sri Lankan Paprae Band, Indian Bollywood dancers, bicycle smoothie maker and promotional giveaways from the Melbourne Stars and Melbourne Renegades.

For the first time, this tournament involved six teams comprising of players from their respective country of origin – India, Pakistan, Nepal, Afghanistan, Bangladesh and Sri Lanka.

The competition aims to increase the number of South Asian cricketers who progress from recreational cricket to professional cricket in Australia and to showcase the talented South Asian players and match officials living in Victoria. It also integrates these communities by promoting different local community leagues to work together under the Harmony In Cricket Association.

There were 800 participants who registered for the tournament, with the best 50 from each nation given the opportunity to trial at the MCG nets for a spot in their country of origin side. Squads of 15 were then formed for each nation.

The tournament ran over five round robin days with the final held at the Camberwell Cricket Ground on 2 January between India and Afghanistan. India reigned supreme, with a 53 run win.

The players selected for the Champions League squad:

The coach of this representative side, Chris Harris, is optimistic about the future opportunities for the talented crop competing in the Champions League.

“The Renegades Champions League has shone the spotlight on the talent that lies within the Australian multicultural community. I believe the league has showcased players that are capable of going on to further Australian cricket honours,” Harris said.

The series is free to the public. You can also follow the action live on MyCricket.

If you want to get involved in a community T20 cricket, visit the Harmony In Cricket Association website.

The Harmony In Cricket Association is always open to registrations for new clubs.

You can register your interest for a new club here or by contacting Hussain Hanif at Hhanif@cricketvictoria.com.au

Cricket Victoria launched Harmony in Cricket in 2006 – our philosophy that cricket is a game for everyone regardless of religion, cultural background, gender, age or ability. If a person has a passion for cricket, cricket has a place for them.

Multiculturalism in cricket has always been welcomed and appreciated in Victoria, and the signing of the community accord at the launch of Harmony in Cricket was Cricket Victoria’s demonstration of a public commitment of applying action to words.

Cricket Victoria has always recognised the potential to engage the newly arrived community of migrants and refugees flowing in to Victoria and in particular, those arriving from historically cricket loving nations such as India, Pakistan and Sri Lanka. For many years Cricket Victoria has worked with communities and stakeholders to develop relationships, strategies and programs to engage people of all cultural backgrounds, religions and genders.

Cricket Victoria understood that with proper consultation and relationship building, the South Asian community was a valuable target market to engage in grassroots cricket and connect to local clubs and associations – not only growing the game of cricket, but building on the rich diversity of the Victorian cricketing community.

The support of VicHealth and the Victorian Government through Sport and Recreation Victoria were the catalysts that Cricket Victoria needed to engage the growing South Asian community, in to cricket.

VicHealth’s State Sporting Association Participation Program provided research, professional advice and funding to resource the development of Cricket Victoria’s strategies. The Victorian Government provided funding that would assist in Cricket Victoria’s investment in analysing participation data and maximising cricket’s use of technology such as Tableau, Australian Bureau of Statistics (ABS) data and cricket’s own customer service and data collection systems – MyCricket and CROWD.

Cricket Victoria was able to use population data from the ABS amongst other sources to support the anecdotal evidence that there was a growing community of migrants that were interested in cricket, playing cricket, coaching cricket and volunteering in cricket – they just hadn’t been engaged by the formal structures of cricket.

Cricket Victoria’s Community Programs Manager, Annie Hateley, teamed up with the MyCricket Participation Analyst, Simon Webb to interpret the data, develop a strategy on how to connect with the community and engage them in the structures of cricket.

Simon was able to identify and target the locations for growth and opportunity across metropolitan Melbourne, while Annie used existing community connections within cricket and the South Asian community to consult for strategy development.

The first consultation was held at Cricket Victoria in September 2013, bringing together leaders in the South Asian community and experienced cricket administrators. The group were warmly welcomed with food and through the shared passion for cricket, before the consultation commenced.

Cricket Victoria devised a number of specific questions which were discussed openly and frankly within the invitees to the consultation meeting and tabulated the feedback, comments and suggestions. Please refer to Addendum 2. In the full report a series of questions included:

The full report of the first consultation can be found here.

During this time, Annie and Simon continued to work with their growing networks to engage the community to adopt Cricket Victoria’s insurance scheme, policies and procedures to minimise risks in the social cricketing community. The Victorian Metropolitan Cricket Association (VMCU) led by President Mark Keating was instrumental in assisting the transition of clubs from unaffiliated and social cricket formats, to developing formal relationships with the peak bodies representing the interests of cricketers and clubs.

Annie, Simon and Mark knew that the consultation would open networks across Victoria and anticipated fast and intense growth, simply based on the data and the current community connections. The customer service enquiries associated with establishing a new club or association within the South Asian community grew exponentially within weeks of the consultation.

The support of VicHealth and the Victorian Government had Cricket Victoria reasonably equipped and ready for the exponential growth. Annie and Simon quickly recruited casual staff and provided updates to Cricket Victoria personnel to prepare for the customer service enquiries and manage some of the enquiries before they were received.

By the end of the 2013-14 cricket season, Simon had already identified a growth of approximately 50 new teams from the South Asian community with over 750 newly registered cricketers playing regular club cricket.

This response was in large part, a result of the cooperation between the newly arrived South Asian community, more established Victorian community leaders and the VMCU and their member clubs and associations.

It was important for Cricket Victoria to celebrate the fact that these communities were working together and demonstrating that their collective efforts not only resulted in more safe and welcoming opportunities in cricket, but also promoted harmony and respect amongst Victorians of all cultural backgrounds and diversities.

A second consultation was conducted in July 2014. The second consultation brought together the original participants, newly identified community leaders, emerging social and unaffiliated cricket groups, the VMCU and selected member associations. Key local government staff were invited for their perspective on ground allocation and community engagement.

By July 2014, Simon and Annie had worked with the VMCU to develop and present five models of affiliation to Cricket Victoria. These models were developed as a strategy to present back to the South Asian community to demonstrate that we had heard them, listened and looked to create a flexible model for their communities, which also complied with Australian and Victorian laws and regulations that govern organised sport.

The feedback was tremendously positive and has helped Cricket Victoria to provide more efficient customer service to new clubs, associations, councils and the South Asian community.

Further issues were also explored beyond basic and initial engagement of communities and are now leading to growth of junior cricket, engaging females and identifying and developing young and talented cricketers.

The full report from the second consultation is available here.

There have been many individual case studies of successful clubs – such as the Darebin Chargers – growing from within the South Asian community and producing successful MILO in2CRICKET programs and developing talented young cricketers.

Cricket Victoria will continue to release case studies and other promotions that highlight the successful engagement of the South Asian community in to the Victorian Cricket family.

The first two consultations have seen the vast majority of the South Asian communities come from primarily from Sri Lankan, Indian and Pakistani communities residing in the western metropolitan suburbs of Melbourne.

A third consultation was held in March 2015 targeting the South Asian community from the south-east corridor of Melbourne.

Once again, the contribution from the community was positive, overwhelming and demonstrated a strong interest in being part of the greater Victorian cricket community. A report of the third consultation will be available shortly.

Annie and Simon are excited to report that there is further anecdotal evidence indicating that many more communities are yet to be engaged from all over Victoria and from emerging communities immigrating from Iraq, Afghanistan, Bangladesh and Nepal.

Simon has undertaken further market research and analysis and can now report that, as expected, there has been continued exponential growth of new clubs and cricketers from the newly arrived South Asian community.

Below is a Summary

Simon has also undertaken further market research to estimate the projected growth of the next 12 months.

The growth in these communities in cricket is only limited to the resources available to Cricket Victoria. Further investment will be required to expand consultations to other metropolitan and identified rural areas.

In recent weeks, Cricket Victoria has undertaken further surveys and discussions with the community in an attempt to provide more support, customer service, education and relationship strengthening with the newly arrived community.

The results of that report can be found here.

It is important to note that the VMCU, local government, Cricket Victoria partners and Cricket Victoria’s Game and Market Development staff have all played extremely important roles in supporting, empowering and engaging the South Asian communities in local cricket. This demonstrates that cricket truly does have a welcoming and inclusive culture, upholding the beliefs of Harmony in Cricket.

Cricket Victoria would like to thank the Victorian Government and VicHealth for their support of Harmony in Cricket and welcoming the South Asian community to the Victorian cricket family.