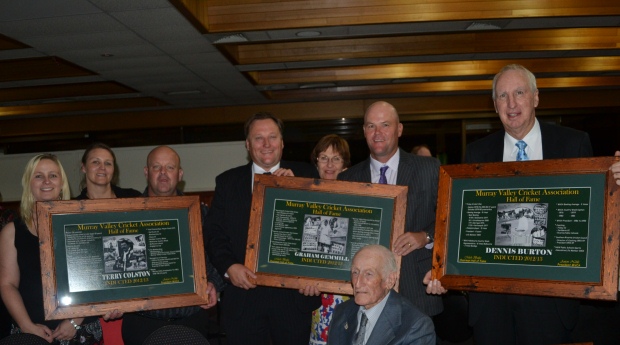 Four outstanding country cricketers were inducted into the Murray Valley Cricket Association's Hall of Fame last month during a gala dinner in Barooga.

Held at the Cobram Barooga Golf Club, Burton and Brown were both in attendance, while Gemmill and Colston were inducted posthumously.

Honouring those that have made a significant contribution to the MVCA, each inductee’s cricket careers were individually highlighted on the night.

Ninety-eight-year-old Stan Brown was the highlight of the night, taking to the microphone and sharing stories from the 1934 tour of England.

The devoted cricketer played his first game of cricket as an 11-year-old at Yalca North.

With an overwhelming passion for the game, Brown completed his career playing for the same club at age 82.

Cricket Victoria’s Country Game and Market Development Manager Chris Harris was also in attendance, noting it as one of cricket’s most enjoyable nights.

“It was a brilliant event that encapsulated the mateship of cricket,” Harris said.

“These long term players and servants of the game are to be admired, not only their cricket exploits, but their capacity to educate the next generation of players, coaches and administrators.

“As cricket fights to win the hearts of kids through Milo in2CRICKET and junior cricket competitions, it’s great to see an association that recognises what a significant contribution these lifetime servants have made.”