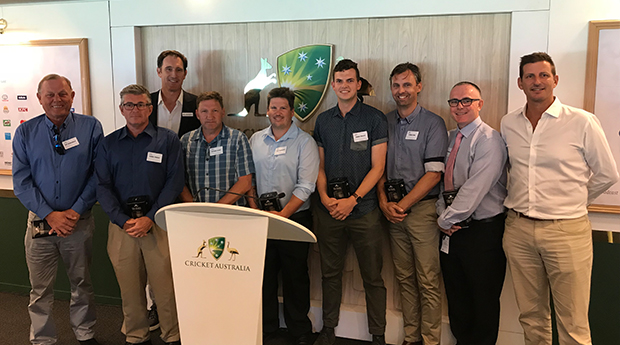 Grassroots cricket is the lifeblood of cricket in Australia.

Thousands of junior coaches across the country are playing their part in helping to inspire, nurture and develop the next generation of stars, whilst enhancing the quality of the cricket experience through coaching.

Simon Ogilvie, from the Golden Point Cricket Club in Victoria, is doing just that.

Simon was recently recognised by Cricket Australia at the One Day International against England at the Sydney Cricket Ground, 21 January.

He was presented with a replica Ashes urn by James Sutherland, CEO Cricket Australia, and former Australian Bowler and current Cricket Australia Board Member, Michael Kasprowicz for his commitment and dedication to junior coaching.

Simon has shown a commitment to developing the game at junior club level and community level.

He has had a clear impact with local schools, clubs and junior players, and shown a willingness and determination to improve their development as a coach. He encourages players’ parents, family members and friends to volunteer with game duties, creates a fun and engaging environment and cultivates learning & enthusiasm, and increases junior playing numbers at the club.

Cricket Australia and Cricket Victoria would like to thank Simon for his valuable contribution to Australian Cricket.