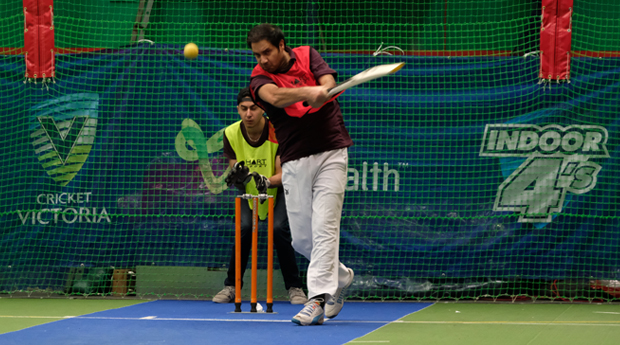 Cricket Victoria and Refugee Week came together at Springvale Indoor Cricket Centre on Saturday for the inaugural Refugee Week Cup.

The tournament was played using the exciting new format of Indoor 4’s, meaning more players were involved and the pace was frenetic. Impressive skills were on show throughout the day despite the fact it was the first time most had tried the format.

Once again, sport proved to be a vital link connecting people from different backgrounds.

Cricket Victoria’s Multicultural Participation Officer and event organiser Hussain Hanif said it was a great environment for refugees to enjoy themselves.

“Sport provides a way for refugees to integrate into society, and Indoor 4’s is an inclusive and safe environment for them to play cricket and have fun,” Hanif said.

“It’s great to see smiles on faces, people slapping each other on the back and high-fiving each other – that represents what the day is about.”

“The day is like dreams coming true,” Razzaq said.

“As an asylum seeker, it means you can kick your stress and be the best you can and give back rather than give up.

“It’s important to come and engage with the community and help others rather than suffer from stress and anxiety.”

Having attracted over 50 participants and 11 teams, the future looks bright for the Refugee Week Cup.

“With the support of Abdul, All Nations, Monash Health and Cricket Victoria, it should be an initiative that grows year by year,” Hanif said.

Razzaq said it was important to be involved, and urged others to join the event next year.

“Get involved because it’s good for ourselves and the community,” Razzaq said. “We can be community builders and role models, you don’t have to give up, you can still do a lot.”

Congratulations to Century CC who were the winners of the inaugural Refugee Week Cup.