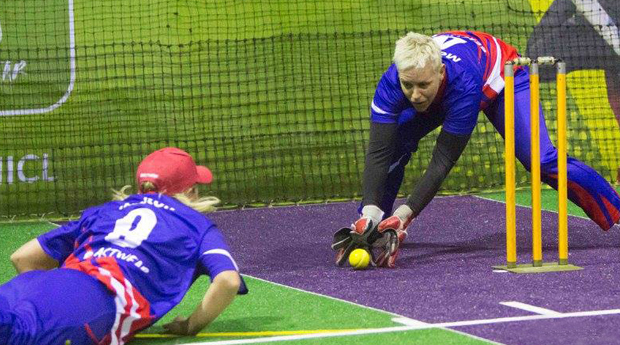 The Croydon Raiders again showed they are the team to beat following a big win over Monash Tigers (96 v -14). Despite the absence of the competition’s leading run-scorer and wicket taker Justin Perkins, Travis Baker (21 runs, 3 wickets), Kieran Perkins (19 runs, 3 wickets) and Mark Appleby (20 runs, 2 wickets) stepped up demonstrating the depth of the Raiders squad.

In the West, Northcote Knights re-established themselves at the top of the ladder after a 26-run victory over their cross-centre rivals Northcote Pirates (82-56). Wayne Dow marked a return to form with 15 runs and 3 wickets for the Knights, while Jarrod Burns continued his strong season scoring 14 runs and taking 2 wickets.

Melton Falcons were also too good for North Geelong Supercats winning 83-43 in the final match of the round. David Simpson (12 runs, 2 wickets) and Steve Robertson (16 runs, 3 wickets) were valuable contributors for the Falcons, while Mitch Sleeman continued his strong season for the Supercats with 14 runs.

Only four points separate first to fourth on the West Zone ladder after the completion of Round 7 matches.

The Kings remain top after successfully defending their total of 110 batting first against the Scorpions. Janelle Hayhurst led the way with 16 runs and 2 wickets, while Nicole Martin continued her strong form with the bat scoring 23 runs. In reply, the Scorpions could only manage a total of 81 despite Laura Shaw’s best efforts (17 runs).

Melton also achieved victory after a narrow 20 run victory over Northcote Knights (86-66). Aimee Melford made 15 runs and took 2 wickets in the victory, while Izzy Webber was the best for the Knights with 16 runs.

In the East, Cranbourne were comfortable winners over Northcote Pirates 144-81. Cherie Hallett (28 runs) and Shalee Clydesdale (25 runs) were key performers with the bat, while Marnie Kelly chipped in with two wickets with the ball.

Monash Tigers remain top of the ladder after a dominating victory over Springvale Seahawks 132-51. Stella Reid (25 runs, 2 wickets) and Erin Carroll (21 runs, 3 wickets) were influential for the Tigers throughout the match.

This weekend sees the Men’s cross-over double headers return with matches at Northcote and Croydon. While Springvale and ICON Arena will play host to Women’s NICL matches.