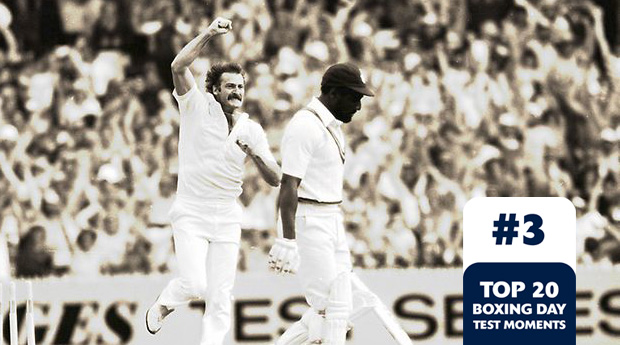 Dennis Lillee steaming in and knocking over West Indian superstar Sir Vivian Richards on the final ball of the opening day of the 1981 Boxing Day Test is one of the most memorable moments at the ground.

Dennis Lillee steaming in and knocking over West Indian superstar Sir Vivian Richards on the final ball of the opening day of the 1981 Boxing Day Test is one of the most memorable moments at the ground.

Inspired by a vocal home crowd, Lillee bowled the key batsman to cap a remarkable spell in which he claimed three wickets in a 35-minute period before stumps.

Led by a heroic century from Kim Hughes (read more about the innings at http://cricvi.co/U86Td9) Australia posted 198 before Lillee ripped through the West Indian top-order in the final hour of day one to leave the tourists 4-10 at stumps.

The West Indies fought back on day two to snatch a three-run first innings lead with Lillee finishing with 7-83.

When he claimed his fifth wicket of Larry Gomes, the paceman became the leading Test wicket taker.

The home side posted 222 in their second innings, despite the best efforts of Holding (6-52) with Hughes (eight) unable to repeat his heroics.

The Australians, led by off-spinner Bruce Yardley (4-38), bowled the West Indies out for 161 to secure a famous victory.

Lillee finished with 10-127, the seventh and final ten-wicket haul of his career.