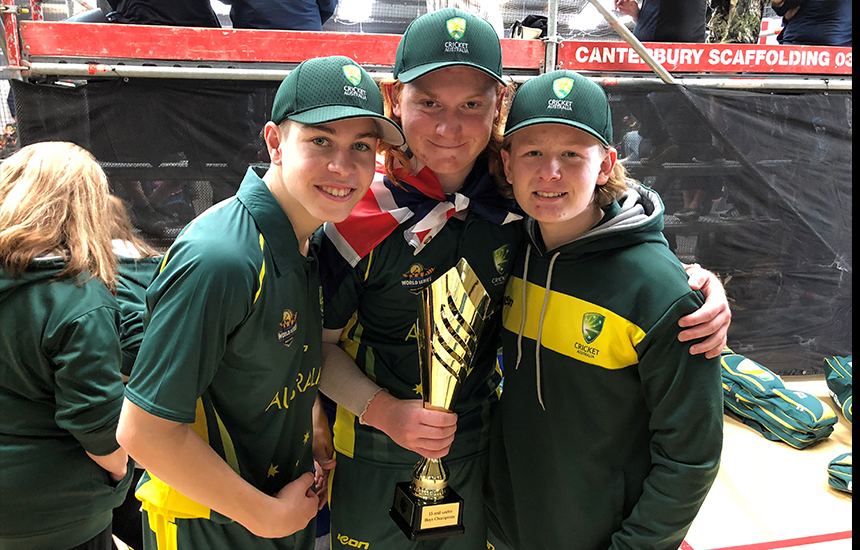 Cricket Victoria & Cricket Southern Bayside (CSB) is delighted to see the success of our “Its Cricket Your Way” program, by providing cricket opportunities beyond the genesis of CSB, being Men’s Turf.

During the winter of 2018 CSB took the bold step of entering a team in the Cricket Australia National Indoor Cricket League (NICL), akin to sending one of our Men’s Turf Championship Division teams off to compete in the Sheffield Shield.

Jordan Hesline, Jai Lemire, Reiley Mark and Josh Sugden, from the team all represented under age Victorian sides at the 2018 National Indoor Championships in Toowoomba, where Reiley Mark was crowned as player of the final and they delivered Victoria a national title.

Now Jordan, Jai, and Reiley have taken this a step further by representing Australia in Christchurch earlier this month and becoming World Champions after defeating South Africa in the final, after which the South African coach was glowing in his admiration of not only how the team played but conducted themselves. Declan McComb from Cheltenham CC, but not from the CSB NICL side, also represented Australia at the same junior tournament.

CSB has grown from its 23 Men’s turf clubs to now represent 33 clubs. CSB has added a Master competition, a Women’s competition, delivered an Indoor female Social Sixes program to encourage new participants to the game, and the NICL team as it develops cricket in all its forms across the region, working to deliver Cricket your way!

Cricket Victoria & CSB is delighted for Jordan, Jai and Reiley who can lay claim to CSB’s first international representatives, and World Champions.