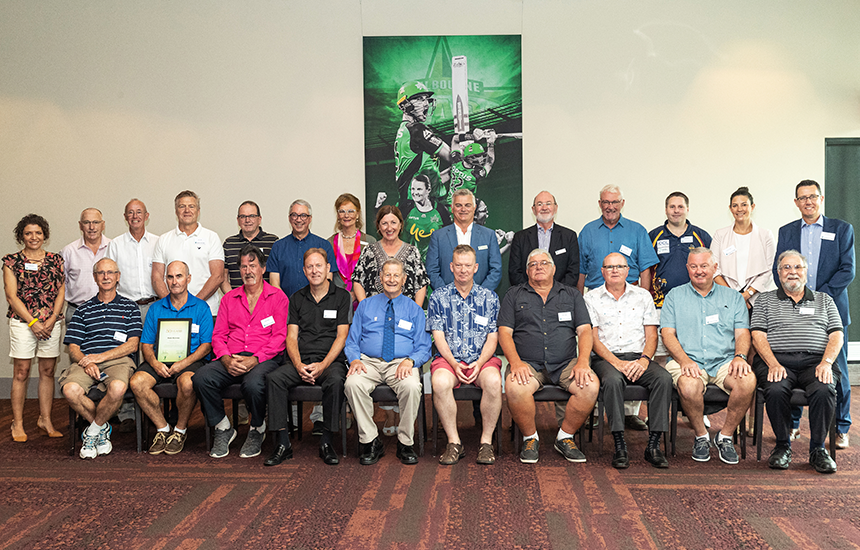 Cricket Victoria has paid tribute to long-term volunteers at the 50 Year Service Awards on Day 3 of the Domain Boxing Day Test against New Zealand at the MCG. This is the 16th consecutive year of the awards, that look to highlight those who have contributed outstanding service as either a player, coach, official, administrator or volunteer of our great game.

Hosted in the historic Olympic Room, 23 recipients, who were nominated by their peers, receive a framed certificate signed by Cricket Australia CEO Kevin Roberts and Cricket Victoria CEO Andrew Ingleton to thank them for their contribution and commitment to cricket in Victoria.

Local clubs and associations rely heavily on the passion, hard work and dedication of the large volunteer cricket community who invest enormous time in the successful running of our game.

Among those recognised is Michael Brettargh, who has given 65 years of outstanding service to St Barnabas Cricket Club. Michael has spent his entire career at St Barnabas CC, beginning in 1955.  Michael enjoyed a decorated playing career which spanned close to 400 senior games and many junior games, as well as being a premiership player and premiership captain. He also spent over a decade on the club committee including a long stint as President.

Even though he has stopped playing, Michael makes the trip every Saturday by public transport from Ballarat to North Balwyn to watch his beloved club. He always makes sure he has a jacket, so he can go out and umpire. He helps out with scoring and assists with club duties in any way he can. He’s often described as a true gentleman, wonderful clubman and a cricket lover.

The Awards are a fantastic opportunity for Victorian Cricket to thank local heroes like Michael, that make community cricket possible.

Cricket Victoria would like to congratulate the 23 volunteers who thoroughly deserve their award for their tireless contribution to cricket for over 50 years: