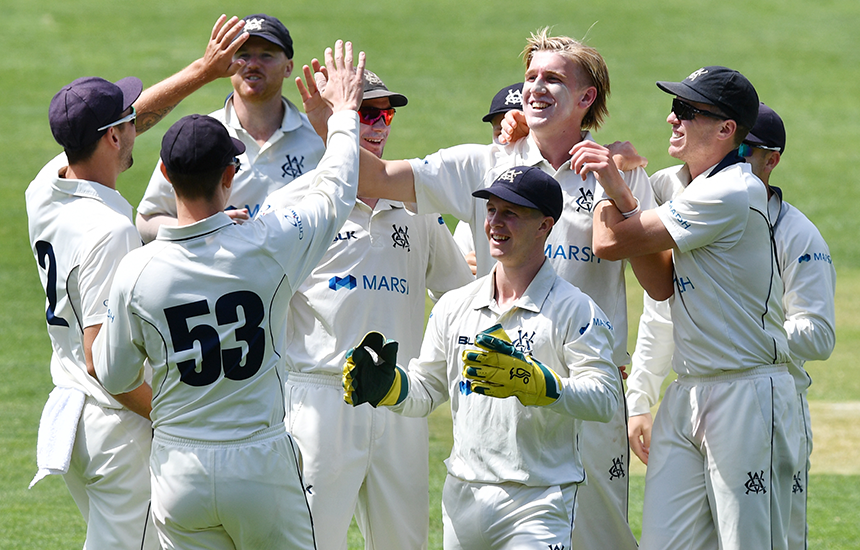 Victoria's third-straight Marsh Sheffield Shield victory has kept hopes of making the 2019-20 final alive heading into the final round.

Spurred on by a career-best haul of 6-67 from Will Sutherland in South Australia’s second innings, Victoria completed a 182-run win at the Adelaide Oval on Sunday.

After losing the toss and being asked to bat first by the Redbacks on day one, half centuries from Nic Maddinson (66), Sam Harper (62) and Marcus Harris (59) along with a useful 40 from Peter Siddle helped the visitors to a competitive 292.

The Victorian bowlers then put their side right on top, bowling South Australia out for 214 after the home side made a solid start to be 2-101. Siddle (3-27) and the returning Andrew Fekete (3-57) did the bulk of the damage.

Travis Dean (92) and Maddinson (66) then contributed second innings half centuries as Victoria stretched the lead to nearly 400, before declaring at tea on day three at 6-320.

What seemed an unlikely final innings chase was all but snuffed out at stumps, as South Australia found themselves a 4-80. The final six wickets were all collected shortly after lunch on the final day.

The win continues Victoria’s late-season charge towards the final and their fate will most likely rest on the result of the match against Tasmania at the CitiPower Centre starting on Thursday 19 March. The Victorians will also be hoping for some help from the South Australia, who meet Queensland in the final round.

The full South Australia vs Victoria scorecard is available here.