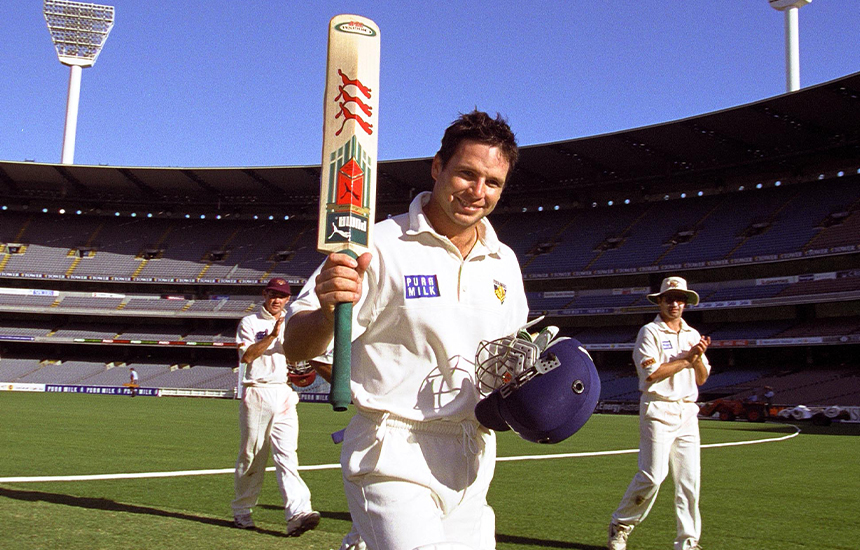 Two of Australian cricket’s finest domestic players will forever be acknowledged for their significant contribution to state cricket with the introduction of the Hodge-Matthews Trophy, a perpetual trophy that Victoria and New South Wales will play for when they meet in the Marsh Sheffield Shield.

Named in honour of cricketers Brad Hodge and Greg Matthews, the establishment of this trophy is to celebrate and recognise the historical significance of the Victoria-New South Wales cricket rivalry.

When naming the trophy, the Boards of both Cricket Victoria and Cricket NSW decided upon Hodge and Matthews, with both men having played the most Sheffield Shield matches for their respective states.

“The on-field battle between Victoria and New South Wales is well over 150 years old and is always highly competitive. The Hodge-Matthews Trophy is a unique way to recognise the rivalry and the wonderful history of matches between our states,” Dr Maddocks said.

“We’re delighted that Brad Hodge has accepted our invitation in the naming of this trophy. With more than 10,000 Sheffield Shield runs and 140 matches to his name over 16 years with Victoria, we felt Brad was the appropriate choice to represent the best aspects of this rivalry. Brad is Victorian through and through and his achievements on the field are something that many of our players – current and future – strive to emulate.”

Brad Hodge said he was delighted to be involved.

“I’d like to thank Cricket Victoria for this opportunity – it’s an honour. My time wearing navy blue are some of my best memories in cricket and our rivalry with NSW was always tough and competitive – no one wanted to give an inch.

“I’ll always follow Shield cricket closely, but these games will have even more meaning for me. To share the naming of this perpetual trophy with Greg is a privilege and I hope it spends more time at Junction Oval than in Sydney!”

Cricket NSW Chair John Knox said the introduction of a perpetual trophy was only fitting considering the history between the two states.

“The establishment of the Hodge-Matthews Trophy to celebrate the rich history of both New South Wales and Victoria cricket has been 165 years in the making,” Knox said.

“While the Sheffield Shield commenced in 1892, the two states had met previously on 49 occasions with the first match taking place in March 1856.

“Since then, both New South Wales and Victoria have produced some of cricket’s greatest ever players, with both Greg Matthews and Brad Hodge embodying what it means to represent their respective state.

“Greg has had a long and distinguished career, taking 363 wickets and scoring 5,567 runs in 116 Sheffield Shield matches. There is no one more passionate about the Baggy Blue than Greg and we are thrilled to be able to honour his contribution to NSW in the naming of the trophy.”

Greg Matthews, NSW Sheffield Shield Cap #602 said that no greater honour could be bestowed upon him.

“‘Percy’ Philpot said to me in 1980 before I went to Perth representing NSW Colts, that I was playing for the greatest state, province or county in the cricketing world.

“He mentioned Bradman, Morris and Miller, and to have the opportunity for a trophy to be named after me with all these greats, the legends like Davo, better men than I’ll ever think of being, it’s extremely humbling.

“Just because I played a couple of games, took a couple of catches, and scored a couple of runs, to have a name on a trophy representing New South Wales, it’s one of the greatest honours that has been gifted upon me in my life.

“To share this with Brad, someone who scored 992 runs in his first season as a young punk and an unbeaten 203 for Australia, it’s special and incredibly humbling.

“My mother, Neita Matthews passed away in August of this year. She was a Patron of Netball NSW, in their Hall of Fame and is a Queen’s Birthday Honour recipient, I just wish she was here to share in this moment.”

The Hodge-Matthews Trophy will be played for each time New South Wales and Victoria meet in the Sheffield Shield, with the first edition to occur this week when the two states meet at the Sydney Cricket Ground.

In the event that the match is drawn, the Hodge-Matthews Trophy will be held for presentation to the next winner of a match between the two sides. Moving forward, should a Shield match be drawn or tied, the state which holds the trophy will retain it until the two states meet again.

The Hodge-Matthews Trophy is currently in production and will be unveiled in due course.