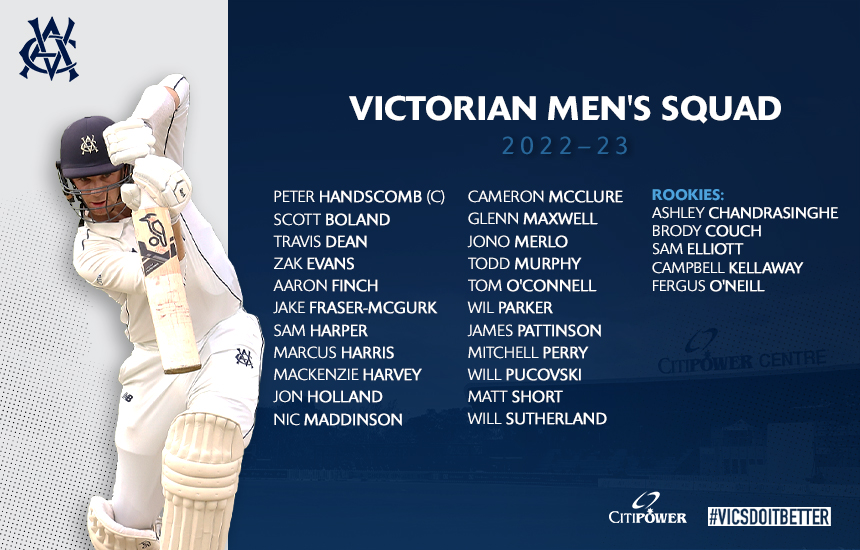 Cricket Victoria has confirmed its male contract list for the 2022-23 season.

A total of 27 players have been awarded contracts including new rookies Ashley Chandrasinghe and Campbell Kellaway.

Chandrasinghe performed strongly for the Victorian Second XI across the 2021-22 season, leading the run scoring charts for Victoria with 423 runs at an average of 84.60. The 20-year-old top-order batter also scored 639 runs across the Victorian Premier Cricket season for Casey South-Melbourne.

Kellaway signs his first rookie contract fresh off an impressive Under 19 World Cup campaign with Australia. The right-handed batter finished in the top 10 run scorers for the tournament with 239 runs at an average of 47.80.

Cameron McClure and Todd Murphy have both been upgraded to full contracts from rookie contracts.

Murphy was recently selected in the Australia A squad to tour Sri Lanka after some strong performances in the Marsh Sheffield Shield and Marsh One-Day Cup for Victoria. McClure also impressed making his debut for Victoria with the both red and white ball.

Wicketkeeper-batter Seb Gotch has retired from professional cricket with a chronic finger injury. Gotch made his Marsh Sheffield Shield debut in 2017 before playing 29 First Class matches which included two centuries.

Xavier Crone, James Seymour and Tom Jackson were not offered contracts for the upcoming season.

“The squad did a fantastic job to make it to the Marsh Sheffield Shield Final after a testing season which saw an interrupted start. Our squad depth was tested, calling on 20 players throughout the Shield season. The upside to that was continuing to develop our emerging talent which holds us in good stead for this season,” Cricket Victoria’s General Manager – Cricket Performance Shaun Graf said.

Scott Boland’s international performances over the summer was no surprise to us and we’re thrilled that he’s been able to secure a Cricket Australia contract.

“Ash Chandrasinghe and Campbell Kellaway have both progressed through the Cricket Victoria pathway system and shown their quality by scoring a lot of runs at Victorian Premier Cricket level and above. Chandrasinghe’s performances for the Victorian Second XI and Kellaway’s performances at the U19 World Cup indicate to us that they’re ready to progress into domestic cricket.

“The progression of Murphy and McClure this season was very pleasing, they were both presented with some difficult situations in matches and were able to make good decisions and perform strongly. We’re excited for Todd to get an opportunity to tour Sri Lanka with Australia A and look forward to following that closely.”