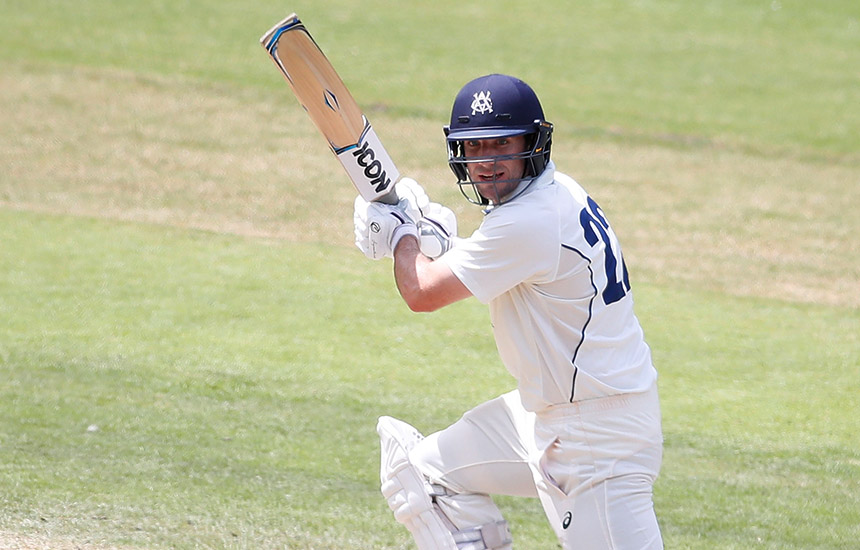 Newly-contracted Victorian batsman Eamonn Vines says his whirlwind 2017-18 season was unexpected, but he’s excited for the challenges that lie ahead.

Vines, who made his JLT Sheffield Shield debut earlier this year against South Australia, has earned his first state contract in his home state, on the back of a bumper season with Premier club Geelong, at Futures League level and having shown strong signs in his early Sheffield Shield appearances.

“(I) had a feeling that it could happen, just because of the season that I’d had, and playing a couple of Shield games,” Vines said.

“But you never really know until you get told, so yeah, that was a pretty good feeling (finding out about the contract).”

Vines was named captain of the Victorian Premier Cricket Team of the Year last summer, a year in which saw him post 804 runs at an average of 73.09.

“I didn’t go into last season with those sort of expectations, I just go into cricket to enjoy it, to enjoy training, and it all just happened,” he said.

“I kept that mindset – try to enjoy it and don’t change what I’m doing.”

Vines played two games for Victoria last season – his debut game at the Adelaide Oval against South Australia, and then back home to play against Queensland at the MCG, a brilliant experience for the Victorian native.

“It was a little bit surreal,” Vines said.

“I’d been around the system for a while, but never in the system. When I got told I was 12th man for the NSW game, it was just a really good experience to be around guys like Cam White, Aaron Finch and Glenn Maxwell.

“To actually play at Adelaide Oval, it kind of didn’t feel real because I’d never really expected it to happen. I just tried to enjoy myself, and I knew that there was going to be a lot of pressure with the game, as Shield cricket is very intense, so I just tried to enjoy it, and every moment that came with it.

“Going from Adelaide Oval to the MCG, it was brilliant. I would’ve liked to make more runs, the pitch was very flat, and it seemed as though every batter was making heaps of runs, so I wish I’d done better, but just to even walk around, use the Victorian locker rooms, it was really special.”

While Vines had a more than reasonable start to his Shield career (27 and 23 in Adelaide, 34 in Melbourne), he now wants to translate these starts into big scores.

“You never know what Shield cricket is like until you play it,” he said.

“It was a mixture of being happy (with starts), but not making a big score that impacted the game – you contributed, but didn’t impact the game.”

“I’ve played Futures cricket for three years now. I was in and out, and I never really performed,” he said.

“The season that just went in Futures League cricket, it set me up and I got rewarded for it.”

Now the next step is getting stuck into pre-season training with Victoria, and transferring that dominance of Premier and Futures League cricket into consistent Sheffield Shield runs.

“I’ve never been one to set season goals in terms of runs or anything like that, I sort of look at what I’m good at, batting wise, and what I need to work on, and then just attack pre-season like that,” Vines said.