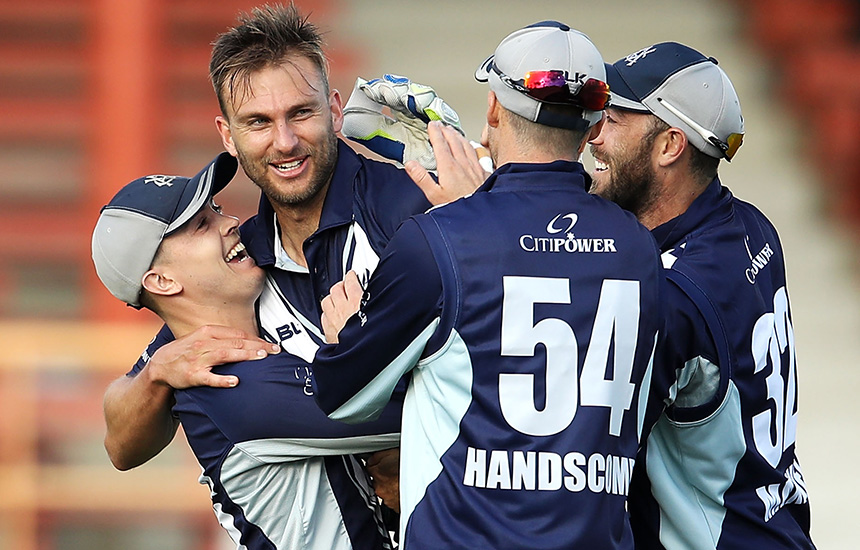 White crashed 123, his third domestic 50-over century at North Sydney Oval as Victoria posted 327 before bowling the home side out for 261.

Peter Handscomb returned to form with a crisp 89 while young left-arm speedster Coleman was the pick of the bowlers for Victoria, finishing with 5-39 from seven overs.

Blues quick Sean Abbott picked up a career-best 5-70, while Moises Henriques (77) and Daniel Sams (51) gave the hosts a chance in the run chase, but the target was too grand.

The win propels Victoria to third place on the JLT Cup points table and roots NSW to the bottom, and although every team qualifies for the finals, the Blues will want to generate some kind of momentum before the knock-out stage of the tournament.

On an overcast morning, Blues captain Kurtis Patterson won the toss and elected to bowl and after one delivery it looked like a stroke of genius as Victoria opener Seb Gotch chipped Abbott to mid-on from the first ball of the match.

When Marcus Harris fell in the 12th over to returning seamer Ben Dwarsuis the Vics were 2-55, but that brought White and Handscomb together and the pair did not part company until 30 overs and 190 runs later.

White savaged anything over-pitched while Handscomb jumped on anything short of a length as the Blues had few answers in the middle overs.

Handscomb was dropped on 47 – a difficult chance down the leg-side by gloveman Jay Lenton – before falling to a good catch by Dwarshuis off the bowling of off-spinning allrounder Chris Green.

An over later, White’s innings came to an end when he slapped Abbott to Patterson at mid-off, his knock featuring 13 fours and three sixes.

Cameos from Glenn Maxwell (21 off 10) and Nic Maddinson (20 off 10) lifted the score to 327, but it could have been much more if it wasn’t for Abbott, who picked up three late wickets.

The Blues’ chase stuttered when Daniel Hughes fell to the first ball of Will Sutherland and promoted opener Jack Edwards was dismissed from the maiden delivery of Coleman to leave NSW 2-57 after 61 balls.

Patterson cracked eight fours and a sole six before he poked and edged a Coleman delivery to gloveman Gotch for 48, and when Nick Larkin and Lenton were dismissed the Blues were 5-169 in the 32nd over.

But a stunning fightback led by Henriques and Sams revived the Blues’ chances. Together the pair hammered 50 from five overs with an array of big hitting that had the sparse crowd ducking for cover.

The resistance ended when Henriques, who had struck six sixes, was caught at mid-wicket by White, and from there the match went the way of the visitors.

Sams launched a huge six, one of his five, to bring up his half-century, but his wicket sparked a collapse of 4-7 to see the game end with eight overs to spare.