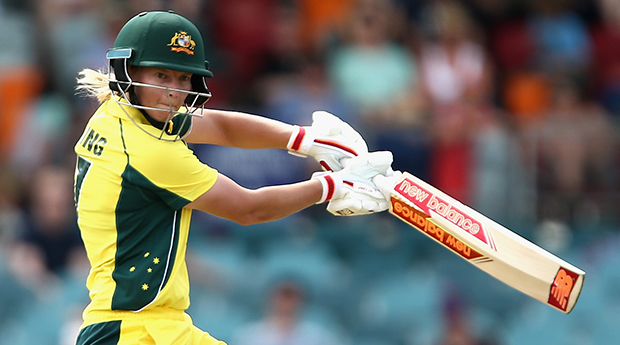 The wait is almost over for the Southern Stars in the UK, as they embark on another journey to World Cup glory beginning tonight against the West Indies.

The team have been hard at training for months both in Australia and England in the lead up to the 2017 ICC Women’s World Cup, and with two wins from two warm-up matches now under their belt, captain Meg Lanning says they’re ready for the main event.

“It’s been a long time coming and the preparation has been long,” said Lanning.

“We feel like we’ve had enough time to get used to the conditions here in the UK and now everyone else is playing, we’re just itching to get started.”

The last time Australia played the West Indies, they were defeated by 8 wickets in the 2016 Women’s Twenty20 World Cup Final.

However, Lanning says the loss isn’t a primary focus heading into the match, and their strong preparation to date will see them go in with confidence.

“We haven’t spoken about it (WT20 Final loss) too much to be honest. There’s no doubt that that loss hurt our group, but I feel like we’ve improved a lot since that tournament,” said Lanning.

“We’re very confident heading in. We feel like our preparation has been really good and hopefully come [tonight] we’re ready to execute really well.

Although the West Indies have lost both of their warm-up matches, Lanning is expecting another tight contest that will go a long way to preparing the side for a seventh World Cup title.

“We’re expecting a very good West Indies side to come out tomorrow and we’re expecting them to play at their best,” said Lanning.

“We’re looking forward to the challenge, we always enjoy playing against them and they’re usually very good games.

“We know we need to play really well to beat them and hopefully we can come out and start off well.

“We’re ready to go and we’re looking forward to getting started.”

Australia’s opening clash against the West Indies at the County Ground in Taunton begins tonight at 7:30pm AEDT, and will be telecast live on FoxSports and through the 9Now app.